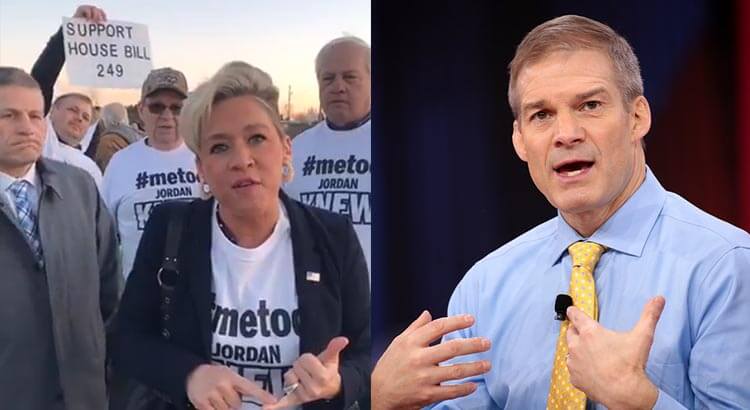 MARION, Ohio — Small business owner and conservative activist Melissa Ackison (R-Marysville), a candidate this year for the 26th district state senate seat in the most brutal primary race in Ohio state legislative history, attended a protest in Marion on Thursday, demanding justice for victims of sexual abuse at Ohio State University by a team doctor when U.S. Congressman Jim Jordan (R-Urbana) of Ohio served as assistant wrestling coach at the university years ago.

Wearing shirts with the text “Jordan Knew,” Ackison was joined by several other protesters including Adam DiSabato, a former captain of the Ohio State University wrestling team in the late 80s and early 90s, who told the House Civil Justice Committee that Jordan called him “crying, groveling” after his brother, Michael DiSabato, made headlines when he said that Dr. Richard Strauss’ abuse was widely-known to those involved with the wrestling program, including Jordan.

“I was just thrown out of the Marion Ohio GOP event, an event that I paid $250 to get in. There are groups and groups of people here protesting in support of House Bill 249. House Bill 249 seeks to protect all of the victims of the Ohio State doctor who raped, who fondled, and who molested men who attended multiple programs but specifically their wrestling program,” Ackison said in a Facebook live video.

“I was thrown out of the event in the presence of all of my volunteers, all of my supporters. There was a man who came inside with me tonight and ten other volunteers and supporters of my candidacy. They brought the police in and physically removed us from the event. These are Republicans, these are Marines, these are people who have been molested and abused,” Ackison continued, accusing Marion County Republican Party Chair Robert Schultz of “strongarming and roughhousing” her group.

DiSabato told lawmakers Jordan called him “crying, groveling… begging me to go against my brother.”

Jordan denies claims that he knew about the sex abuse of college wrestlers by a team physician when he was an assistant coach for the wrestling team at OSU from 1987 to 1995.

At least four former wrestlers and a referee have said they complained to Jordan about Dr. Richard Strauss — but the Ohio Republican has dismissed their claims as ridiculous.

A lawsuit filed by 43 survivors against Ohio State claims the university’s “ingrained culture of institutional indifference” enabled Strauss to sexually abuse former students and athletes from a half-dozen other sports.

The lawsuit cites instances of Strauss “drugging and raping athletes” and said Strauss preyed on underage boys who participated in athletic events on the campus.

The lawsuit, filed in federal court in Ohio, implies that Jordan’s response to the incident was essentially a shrug.

Another lawsuit claims that a referee says Strauss masturbated in front of him in a shower after a wrestling match in 1994.

When the referee reported the behavior to then-head wrestling coach Russ Hellickson and assistant coach Jordan, he says, they waved off the incident.

State Rep. Tavia Galonski (D-Akron) has said she would like to compel Jordan to testify under oath about whether he was aware that the wrestlers he coached were being sexually abused by Strauss.

The former team doctor worked on various sports teams at the university from 1978 to 1998. He died by suicide in 2005, but the investigation into his alleged actions is ongoing.