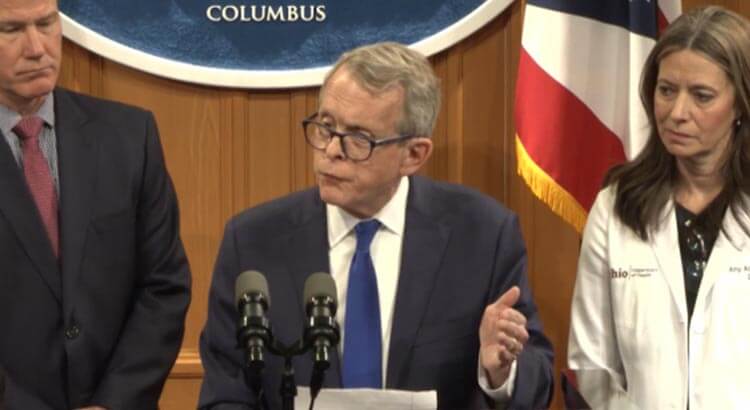 Gov. Mike DeWine ramped up efforts Tuesday to curb the novel coronavirus in recommending — though not ordering — colleges to hold classes remotely, professional and collegiate teams to prohibit spectators, and other changes in nursing homes, churches, and prisons.

The requests mark an escalation in Ohio’s preventative efforts after officials announced Monday that three Ohioans tested positive for COVID-19 in Cuyahoga County.

Throughout a press conference, both DeWine and state Department of Health Director Dr. Amy Acton deployed grave and at times morbid rhetoric in urging cooperation from people, business and event organizers alike.

“We are at a critical time and we need to get this right,” DeWine said. “Every action we take can and will help save lives.”

DeWine listed a spread of “recommendations” he made after consulting with medical experts. They include:

DeWine emphasized these are only recommendations at this point and declined to specify when and why they might become legal mandates.

However, he emphasized people’s lives are at risk and that the disease is likely to kill Ohioans.

“Probably, in all likelihood, we’re going to lose some people,” he said.

Reactions to DeWine’s recommendations were mixed. Some of the state’s largest universities announced Monday they would hold classes remotely. However, both the Columbus Blue Jackets and the Cleveland Cavaliers said they will continue allowing spectators as usual.

Before the media event, Ohio State University announced it would suspend all face-to-face instruction immediately until at least March 30, according to The Lantern, a student newspaper.

In a statement, the Columbus Blue Jackets said they would not heed the governor’s request and will remain open to ticketed fans who wish to attend.

A spokesman for the team said those vulnerable to the disease should follow public health guidelines and avoid large scale events. He added the arena has undergone additional cleaning and is providing more hand sanitizer.

The Rocket Mortgage FieldHouse and Cleveland Cavaliers said in a statement Monday night that the organization “respect[s] the discussion and perspective provided” but will continue to allow fans at the Cleveland Monsters minor league hockey game Sunday evening.

“The Cleveland Monsters game this Sunday afternoon is slated to be played with regular fan access,” it states. “We will continue to evaluate, make decisions and provide appropriate updates concerning any potential changes to the on-going event and game schedule as needed.”

The Cavaliers next home game is scheduled for March 24.

Fielding questions from reporters, DeWine also said he has directed state department directors to consider having employees work from home.

“In order to slow the spread of the coronavirus, we need to make the tough decisions now,” he said.

Jake Zuckerman is a statehouse reporter. He spent three years chronicling the West Virginia Legislature for The Charleston Gazette-Mail after covering cops and courts for The Northern Virginia Daily. See the original story at Ohio Capital Journal.