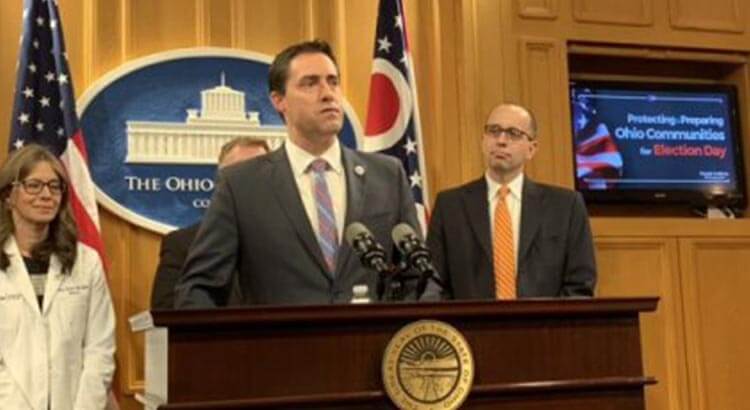 LaRose issued the directive rescheduling the elections after the CDC escalated its social distancing guidelines Monday. The guidelines are designed to curb the spread of COVID-19, a new coronavirus that has infected nearly 200,000 people worldwide, according to a count from Johns Hopkins University.

A judge rebuffed a lawsuit organized by Gov. Mike DeWine Monday evening that sought to postpone the election. The plaintiffs, who say they are elderly and have medical issues, argued that holding the election during the COVID-19 pandemic forces vulnerable people like them to choose between their health and their right to vote.

After 10 p.m. Monday, DeWine and state Department of Health Director Dr. Amy Acton issued an order closing the polls regardless.

The Democrats’ lawsuit asks the court force LaRose to accept ballots by mail until April 25; absentee ballots postmarked by April 28; arrange for prepaid postage for ballots; offer curbside voting; and other considerations. It does not call for an in-person voting day.

They argue the General Assembly sets the date of primary elections in state law, and LaRose did not have any legal authority to unilaterally change the date of an election.

It’s not just Democrats making the claim. At an emergency Monday evening hearing in Franklin County Court of Common Pleas Judge Richard Frye’s courtroom, Rep. Niraj Antani, R-Miamisburg, made a similar argument. He said if the governor wanted to change the election date, he should have convened the legislature.

“The Ohio Revised Code can only be changed by an act of the General Assembly with a signature on a piece of legislation from the governor,” he said.

At a press event Tuesday, DeWine and Acton defended the decision to postpone the election, arguing it was an emergency move that will save lives.

Acton cited a study from the Imperial College of London that models how public health moves like closing schools, quarantining the ill, social distancing and others, could slow down the spread of the virus. That would ease the demand on the health care system and prevent a surge from overwhelming hospitals outright.

These policies, the researchers said, could reduce peak health care demand by more than 65 percent and halve the number of deaths. However, even a mitigated pandemic would still cost hundreds of thousands of deaths and hospital ICUs overwhelmed.

DeWine said Tuesday he’s “open” to discussion about what to do about the election, but he made an emergency decision Monday evening to save lives.

He and LaRose issued a statement after the lawsuit was filed.

“By preventing Ohioans from going to polling locations, we averted a situation which would have gone against the most recent scientific evidence available and could have dangerously advanced the spread of coronavirus across Ohio,” they said. “It is abundantly clear that it would have been impossible to carry out a fair, accessible, and safe election today.”