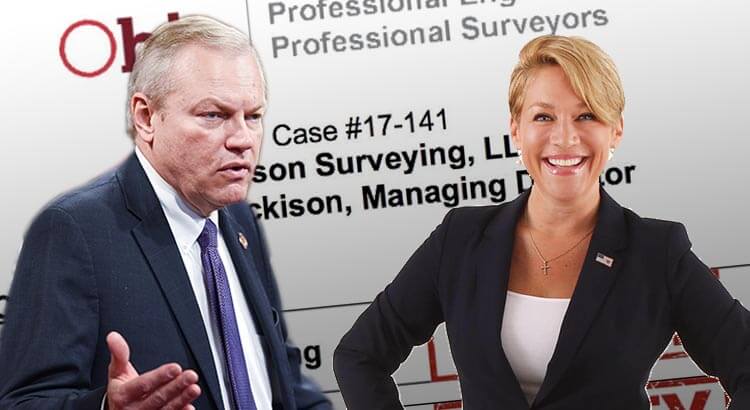 The state senate campaign of current Rep. Bill Reineke (R-Tiffin) is under review by a state agency for distributing a fraudulent document, designed by Reineke’s campaign to appear as if it came from the agency, in an attempt to attack his opponent, Melissa Ackison (R-Marysville), TiffinOhio.net News has learned.

Reineke and Ackison are facing off in the Republican primary race for the 26th district state senate seat. The race has been recognized as the most brutal primary in Ohio state legislative history by multiple media outlets and pundits.

The document, designed by a consultant working on behalf of Reineke’s campaign to appear as if it came from the Ohio State Board of Registration for Professional Engineers and Surveyors, features the Board’s logo and mimics the font and coloring that is similar to what is actually used by the Board. It is used as a “source” for a claim made on Reineke’s attack website, which states “Melissa Ackison’s personal business was found guilty of breaking laws and fined $4,000.”

Contained in the document is the case number and three violations, each alongside the word “GUILTY.”

However, a representative from the Board said the document is not authentic and did not come from their agency, prompting him to send the case to the agency’s legal department for review.

The document is featured prominently on MelissaAckison.com, a website paid for by Friends of Bill Reineke which is dedicated to attacking Melissa Ackison’s record as a small business owner. The website is part of a wider package of attack ads from the Reineke campaign against Ackison including TV, radio, and mailers.

The Reineke campaign’s action of creating a fraudulent document posing as if it came from the Ohio State Board of Registration for Professional Engineers and Surveyors is now under review by the Board’s legal department, TiffinOhio.net News has learned.

This comes just one week after one of Ohio’s largest newspapers, The Toledo Blade, called out Reineke for blatantly misquoting one of their articles on a mailer used to attack Ackison.

“In addition to the multitude of state and federal laws being broken by operating a website that bears my name and likeness, my attorney has filed suit against multiple political operatives,” Ackison said in a statement.

Ackison’s campaign recently filed a lawsuit against Lauren Durant, a Powell-based political operative who is accused of secretly recording an Ackison campaign strategy meeting while posing as a volunteer, and then leaking the recording to the Reineke campaign to be used for attack purposes.

The lawsuit, filed in Union County Common Pleas Court, seeks $25,000 in damages and claims Durant performed the aforementioned actions despite having signed a non-disclosure agreement.

The Ohio primary election will take place March 17. Whoever wins the Republican primary — Ackison or Reineke — will go on to face Democratic challenger Craig Swartz, of Upper Sandusky.