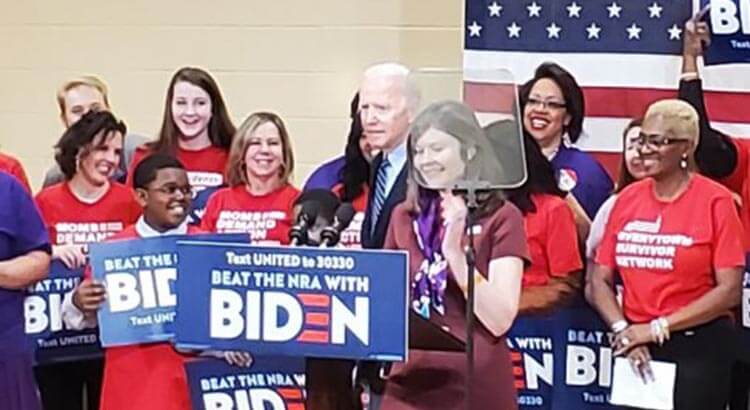 But the coronavirus, not far from anyone’s mind, kept their interaction at an arm’s length.

Around that same time Tuesday afternoon, Gov. Mike DeWine was a few miles away at the Ohio Statehouse urging citizens to avoid public gatherings amid the growing coronavirus epidemic. Biden kept his engagement in Columbus — a crowd-free, policy-focused campaign stop centered on the issue of gun violence — but it wasn’t long before his campaign canceled a public rally planned for that evening in Cleveland.

Fellow Democratic frontrunner Bernie Sanders also canceled his Tuesday night rally in Cleveland. On an Election Day with six states voting and the presidential primary seeming all but over, attention had unexpectedly shifted to other matters.

On Tuesday morning, Secretary of State Frank LaRose announced that Ohio polling places at nursing homes would be relocated elsewhere during the upcoming primary election.

By the afternoon, the Ohio High School Athletic Association decided it would continue its spring tournaments with “limited spectators.” One by one, universities around Ohio canceled in-person classes for the ensuing weeks.

At Driving Park, speakers joining Biden told of ways that the public health issue of gun violence had affected their lives and those of people they knew. Invited supporters with Moms Demand Action and the Brady Campaign to Prevent Gun Violence served as a backdrop for stories of personal tragedy.

Crystal Turner spoke of her two children who were shot and killed in 2015.

“No one deserves the pain I’ve lived through every day,” Turner said.

Electing Biden would bring the nation “one step closer” to ending the gun violence crisis, she said.

Biden followed at the microphone in a solemn, hushed tone.

“I know what it’s like to lose a child,” he said, referencing the deaths of his wife and child in a 1972 car accident. “The grief is overwhelming.”

Biden said he got through the tragedy by finding purpose in his life to fight for the public good.

Brown described Biden as the only candidate left in the field with “the record, commitment, plan and heart” to combat gun violence. Watts called him “the NRA’s worst nightmare.”

The Brady organization is named after Jim Brady, a former press secretary who was seriously wounded in the assassination attempt on President Ronald Reagan in 1981. Biden said he was a friendly colleague of Brady’s, and would later vote for the “Brady Bill in 1993 mandating federal background checks on most gun purchases.

“I’m not opposed to the 2nd Amendment,” Biden said, hours after getting into a confrontation about guns with auto plant workers in Detroit.

A worker had claimed the candidate was “actively trying to diminish our Second Amendment right and take our guns.” Biden replied that the man was “full of shit.”

None of the constitutional amendments are absolute, Biden argued in Columbus, pointing to a person ‘shouting fire in a crowded place’ as a rhetorical example. Support for the Second Amendment is not incongruous to support for gun safety legislation, the candidate said.

In the Dayton shooting last year, Biden said, the perpetrator was able to kill or injure 26 people in a matter of 30 seconds before being stopped by police. AR-15s with high-capacity magazines service only one purpose, Biden said: “kill quickly.”

“No one needs them,” he said forcefully.

He urged voters to stand with him and other pro-safety candidates at the polls.

His speech over, Biden left the Driving Park gymnasium and visited with a few supporters in a back room. They enjoyed a Jeni’s Ice Cream social.

His entourage left the community center, though with his Cleveland plans out the window, it was uncertain where the candidate was headed.