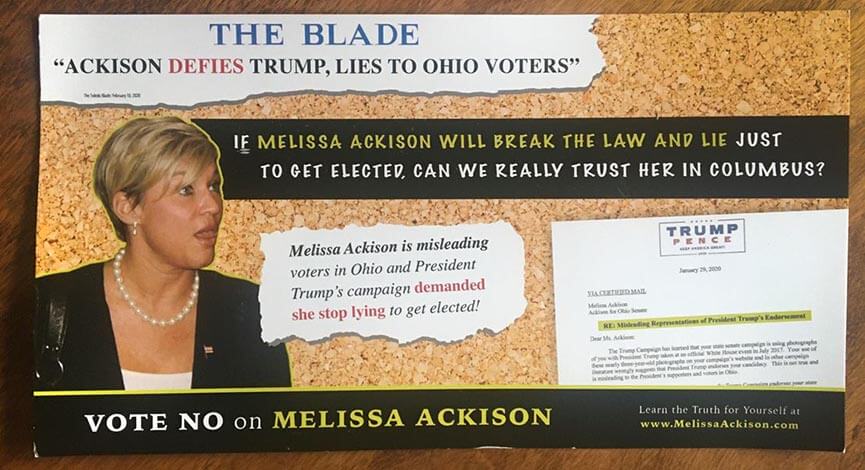 State Rep. Bill Reineke (R-Tiffin) accuses his opponent of lying to voters in the 26th state senate district, but it is Reineke’s campaign that misquoted a Toledo Blade article in its latest attack mailer.

Many registered Republicans in the district opened their mailbox this week to find another attack mailer against businesswoman and conservative activist Melissa Ackison (R-Marysville).

The mailer, paid for by Friends of Bill Reineke, quotes The Blade as printing “Ackison Defies Trump, Lies to Ohio Voters” on Feb. 10.

On that day, The Blade printed a story headlined “Trump demands removal of photos in Ohio Senate race.” The story outlined a letter Ackison received, purportedly from Trump re-election campaign executive Michael Glassner, demanding her to stop using her own photos of her alongside the president.

However, Jim Provance, a political reporter for The Blade, said that the wording used in the mailer doesn’t appear anywhere in the newspaper’s coverage.

“Our mailer was paraphrasing the content of the article from [The Blade],” Reineke’s campaign manager Caleb Stidham told The Blade when reached for comment. “The Trump campaign sent Ackison a cease-and-desist letter demanding she stop lying to voters about her association with the President, and she is defying the Trump campaign demand. We provide The Blade article unedited in its entirety on MelissaAckison.com, the website listed on the mail piece.”

Stidham told The Blade that Reineke’s campaign will no longer use the mailer or quote The Blade in future political messaging.

“Bill Reineke’s campaign has been fueled by anger and half-truths this entire race,” Ackison told The Blade. “District 26 deserves so much more. This is a direct indictment of his capability to effectively serve them in the Ohio Senate. I personally apologize to the Republican voters in the district who’ve had to read these hateful, false, and malicious lies. My entire campaign has focused on issues. I’ve shaken as many hands as I can and learned the issues important to the people.”

The mailer largely follows the theme of a package of TV and radio ads Reineke has launched against Ackison.