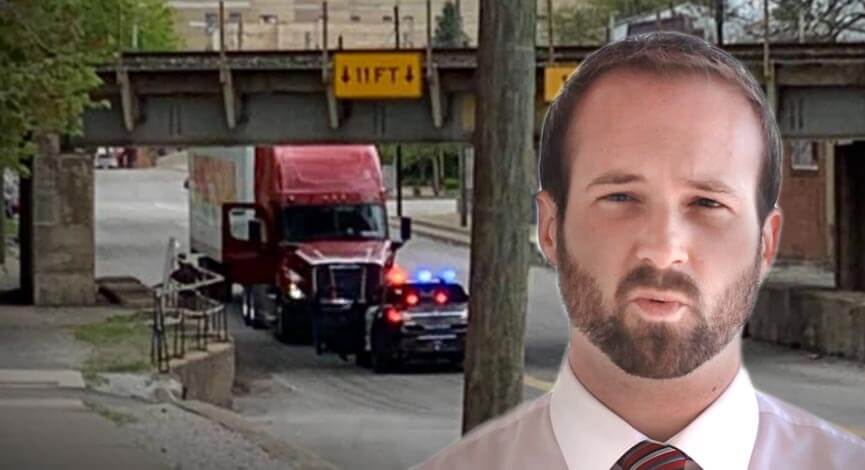 After the second truck in less than a month struck the N. Washington St. viaduct in Tiffin on Monday, Mayor Aaron Montz is speaking out, saying “nothing can fix driver inattention.”

A Williams Distributing truck was driving southbound under the viaduct Monday afternoon when the top of the truck was “peeled off like the top of a sardine can,” as one social media user described it.

Montz’s statement came in response to a question on Facebook from local resident Kenneth Breidenbach. “When they study the flow of traffic in Tiffin, why not do something for the flow of trucks going under the viaduct and crashing?” Breidenbach asked.

“That is actually not even on the truck route,” Montz said in response to the question. “A series of signs directs semi truck traffic to continue straight on Sandusky Street and not to venture down Washington Street when they are heading south.”

Montz said that if truck drivers fail to see that series of signs, a second series of neon yellow signs then warns them of the height of the viaduct.

“If they still fail to see that next set of signs, two large blinking yellow lights flash on the viaduct right next to the final warning sign on the viaduct itself,” Montz said. “I think at some point we just have to come to terms that nothing can fix driver inattention.”

Montz said he’s “not even trying” to sound like he’s “being a jerk,” but added that “if you can’t see all these warning signs maybe the folks driving these semis should be looking into other career options.”

“At some point we have to place the blame where it truly lies and that’s with the person behind the wheel,” Montz said.

What do you think? Do you agree with Montz? Tell us in the comments.