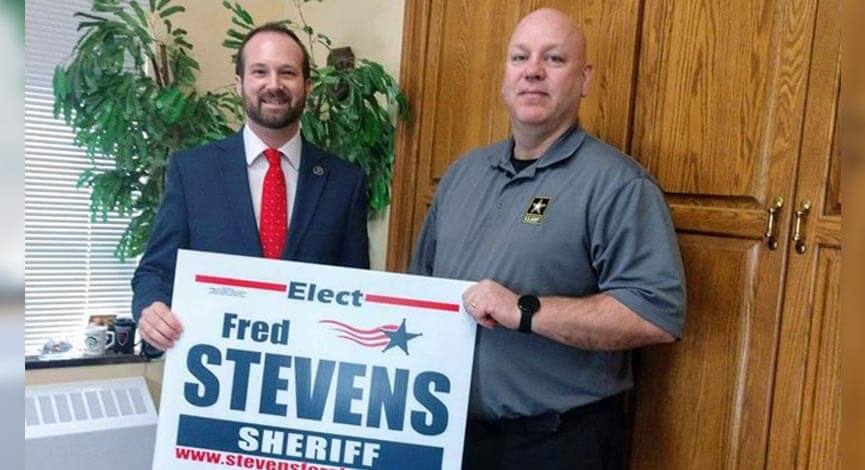 Stevens is running in the Republican primary race in March to succeed current Sheriff William Eckelberry, who decided shortly before the filing deadline not to run for re-election.

“The citizens of Tiffin and the Tiffin Police Department have prospered over his tenure as our Chief of Police. It is with authentic leadership, integrity, and determined guidance that the team of men and women of our Police Department makes a significant impact on making Tiffin rank 16th safest Ohio city according to FBI crime statistics,” Montz said in a written statement.

“When I first appointed Fred Stevens to the position of Chief of Police, I was confident that he was the right person for the job. Since then, not a single day has gone by that Fred has made my question the decision to promote him. In his first full year as Chief of Police, the crime rate in Tiffin fell by over 60%. This was due to his passion for his community, and promise to make Tiffin a safer place for everyone,” Montz continued. “Since that first year as Chief, crime in Tiffin has continued to steadily decline.”

“The Tiffin Police Department had been lead so well by Fred Stevens, that oftentimes other police departments call him and his department for advice on how to handle matters. If there was ever an individual best suited for the position of Seneca County Sheriff, it certainly would be Fred Stevens,” Montz added.

“I have personally seen Chief Stevens be professional in his thinking and decision making and acts in the best interest of our citizens. Fred has the vision, maturity, experience and courage to lead our Sheriff’s Office into the future. I do not doubt that Fred will take the Seneca County Sheriff’s Office to the next level and make us all proud of his leadership,” Montz said.

“I have known Fred for over 12 years and am proud to have him serving our citizens as the leader of our Police Department. He has been instrumental in the decisions that have been made to better our community. Chief Steven’s history has proven to be a definite asset for Tiffin, and even though I would hate to lose him, I know that we will move into the future with the same, demonstrated leadership, once elected as the Seneca County Sheriff,” Montz continued.

In addition to Stevens, two other candidates, David Pahl and Matt Huffman, will appear on the Republican primary ballot.

The primary election will take place March 17. No Democratic candidates filed to run for the seat.