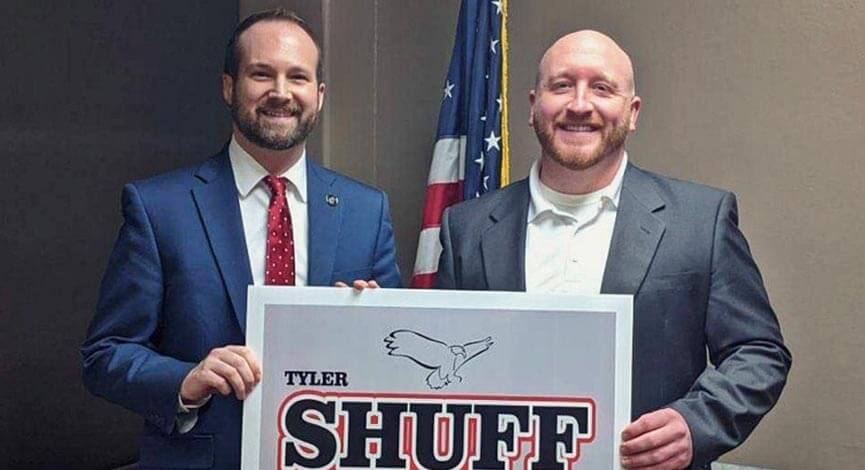 Tiffin City Councilman Tyler Shuff, a candidate in the Republican primary for an open seat on the Seneca County Board of Commissioners, has been clinched the endorsement of Mayor Aaron Montz, his campaign announced Thursday.

“We’d hate to lose him from the city, but I know the county would be gaining a very valuable asset if Tyler is elected,” Montz said in a press release.

At the age of 23, Shuff was elected to Tiffin City Council, where he joined Montz, who was elected in 2007 as a 22-year-old. Montz was then elected in November 2011 as the youngest mayor in the city’s history, as a 26-year-old.

Montz is in his 12th year working with Shuff through the city’s government.

“I probably have more experience working with Tyler as a public servant than just about anyone else,” he said. “Tyler just has a way of working well with people and getting the job done.”

Montz said Shuff displayed many of his positive attributes when he administered a downtown business competition that assisted in the creation of three new locally-owned businesses.

“He has a way of thinking outside the box, using his creativity to get results,” he said.

Montz said he looks forward to working together with Shuff in continuing the progress countywide.

“While I look forward to being part of Tiffin’s continued progress, I am ready to step up and work hard for everyone across the county,” Shuff said. “I want to bring a voice to the villages and townships to meet the needs of those particular communities. The way I view it, a stronger group of villages and townships makes for a stronger Seneca County. I’m ready to bring the momentum countywide.”

Shuff said he is the right candidate to win the seat as a commissioner because he can use existing relationships, like his with Montz, to improve the county. The key theme of Shuff’s campaign is working to bring people together to create a better Seneca County.

“Throughout my entire career I’ve focused on building bridges to people all across the community, I build bridges, I don’t burn then down,” he said.

Shuff said he appreciates the endorsement from Montz.

“I’m honored to have the support of such an effective public servant like Mayor Montz,” he said. “It means a lot to have the backing of someone I respect and who I have enjoyed such a successful history with. I’ve spent countless hours working alongside the mayor to help improve the city and I can’t wait to continue effectively communicating from a seat on the board of county commissioners.”

In addition to serving on city council, Shuff has valuable experience in the private sector, and through public service on more than 20 boards and committees.

He founded Shuff Consulting, LLC, is the Director of Operation for the Tiffin Community Reinvestment Group.

Shuff’s name will appear on the Republican ballot in the March 17 primary election. He is facing off against Adams Township Trustee William Frankart to succeed current Seneca County Commissioner Shayne Thomas, who is running for state representative.