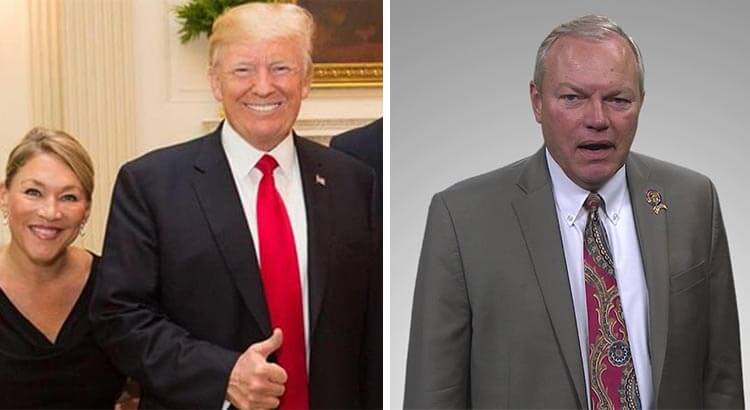 Did the chief operating officer of President Donald Trump’s re-election campaign really send a letter to Ohio Senate candidate Melissa Ackison (R-Marysville), demanding her to cease usage of photos of her alongside the president? Or was it potentially a “fake letter” sent by an operative working on behalf of Ackison’s opponent, current State Rep. Bill Reineke (R-Tiffin)?

Ackison, a small business owner and conservative activist from Marysville, believes the latter is more likely.

“A cease and desist would have come from a law firm not a campaign letterhead. This was a ploy by the Reineke campaign. President Trump would not have a problem with you using the photo. This is simply Reineke using a ploy to say you don’t back Trump,” one social media user said to Ackison in regards to the situation.

“Thank you for being smart enough to recognize what’s going on,” Ackison replied. “I run on issues, Bill runs a smear campaign.”

“RINO Bill is worried and rightfully so. He is so out there. I think he is afraid people will figure out he does not support President Trump, small business owners or gun owners. Only himself,” another social media user said.

“I wanna see a pic of Reineke with Trump… oh wait there isn’t one,” a local man said.

The re-election campaign for President Donald Trump appeared to have sent a letter to Ohio Senate candidate Melissa Ackison (R-Marysville), demanding her campaign to cease usage of photos with the president alongside Ackison.

Attempts by TiffinOhio.net News to reach the Trump campaign to verify authenticity of the letter were unsuccessful.

“Your use of these nearly three-year-old photographs on your campaign’s website and in other campaign literature wrongly suggests that President Trump endorses your candidacy,” the letter, apparently signed by Michael S. Glassner, chief operating officer of the Trump re-election campaign, said. “This is not true and is misleading to the President’s supporters and voters in Ohio.”

Glassner apparently said President Trump has not made an endorsement in the state senate race between Ackison and current State Rep. Bill Reineke (R-Tiffin), who are facing off in the March 17 primary election for the 26th district state senate seat. Whoever wins the primary will go on to face Craig Swartz (D-Upper Sandusky), a real estate agent and business consultant who is running unopposed in the Democratic primary, in November.

The photos in question are displayed on Ackison’s campaign website and social media accounts, including one where President Trump is doing a thumbs-up next to Ackison, and another where Trump is standing with Ackison, her husband Rich, and their children.

“Neither President Trump nor the Trump campaign endorses your state senate candidacy at this time. That could happen, but until then, we demand that you immediately stop using the photographs of you with the President – including removing them from your campaign’s website,” Glassner apparently wrote in the letter.

As of Tuesday, the photos were still on Ackison’s social media profiles and website, and Ackison says she doesn’t plan on taking them down.

“My campaign has never indicated President Trump’s endorsement. We have staunchly indicated our support of the president,” Ackison said in a statement. “Frankly I don’t care who sent the letter.”

Ackison is a small business owner and conservative activist from Marysville. Reineke, a car dealership tycoon, is currently serving as a state representative for the 88th Ohio House district, which includes all of Sandusky County and the majority of Seneca County.

“Don’t you dare tell me how to use my personal photographs,” Ackison tweeted to Glassner on Sunday. “Way to piss off the grassroots Trump supporters with Ohio’s most popular conservative candidate… Piss off punk.”

Ackison added that she believes the letter sent to her was orchestrated by a former campaign operative whom she fired.

“This was orchestrated through a scumbag I fired from my campaign,” Ackison tweeted. “My attorney has already been in touch and this is not from the White House. It was created to create media controversy.”

And when you send a letter threatening me in the name of the President, spell my name correctly. I’m a business owner, a populist, a patriot and I and lead the most charged Political campaign in the state of Ohio against an establishment Never Trumper. Don’t you dare threaten me! pic.twitter.com/T4jACWqnIe

In addition to the photos, a video on her campaign Facebook page features Ackison asking questions such as “Who is going to defend your Second Amendment rights?” and “Who are you going to vote for on March 17?”, followed by a clip of Trump saying “Melissa Ackison.”