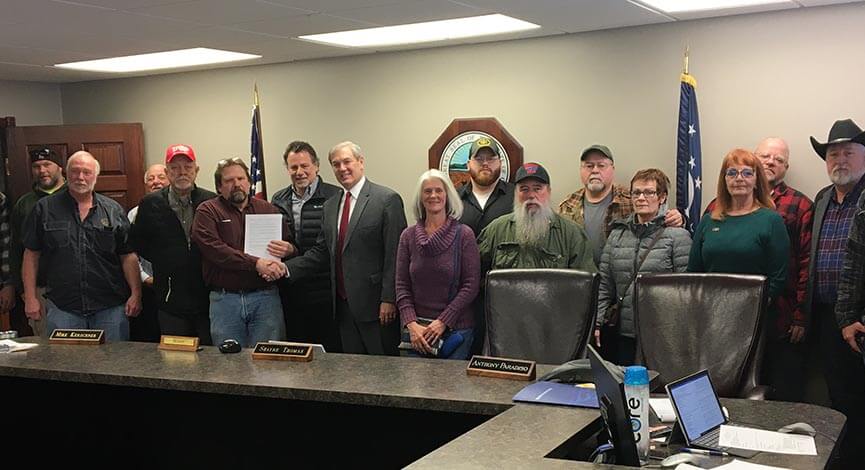 A large group from Ohio Stands United was present at the meeting and gave a round of applause when the commissioners approved the resolution. Before the group left, they posed for a photo with the board.
ShareTweet

TIFFIN — The Seneca County Board of Commissioners heard from Ohio Stands United, a group that works to “preserve and defend the Bill of Rights as enumerated in the Ohio and United States Constitution.”

According to its website, the group educates and trains citizens to be effective communicators, both knowledgeable in public policy and in organizing efforts, to safeguard the principles and ideals of our founding documents.

Ed Clark, from the organization, asked the commission to approve a resolution formalizing its commitment to protecting the Second Amendment to the Constitution.

The resolution, although nonbinding and symbolic, sends a clear message to legislators at the state and federal level that Seneca County supports the individual liberties of its citizens.

The resolution states the board opposes “any restriction on the rights guaranteed by the Second Amendment of the Constitution.” It also states the board wishes to protect the right of citizens to keep and bear arms.

A large group from Ohio Stands United was present at the meeting and gave a round of applause when the commissioners approved the resolution. Before the group left, they posed for a photo with the board.

“Thank you for being here and thank you for fighting for the individual liberties of our citizens,” Commission President Shayne Thomas said.

To see the full resolution approved, visit this link.

In other action, Seneca Conservation District Team Leader Beth Diesch gave a 2019 update from her department and previewed 2020.

Diesch said she was proud to report that Seneca County agricultural producers had zero pollution complaints in 2019. She discussed the employees of her department and explained their roles and also spoke about state and federal programs that are aiming to improve water quality.

Also during the meeting, the commissioners opened bids for a one-year lease on county-owned agricultural land in Eden Township.

In April of last year, the roughly 147 acres of farmland was leased for $225 an acre for one year.

The following bids were received:

The board also received two bids for a 64-passenger school bus on behalf of the Seneca County Opportunity Center. The bids were from Cardinal Bus Sales and Services ($94,155) and Rush Trucking Center ($98,958).

In other action, Amy Hoffman from Palmer Energy, discussed the county’s electric aggregation plan. Palmer Energy partners with the County Commissioners Association of Ohio to help manage a natural gas and electric program for member counties.

Seneca County has opted into this program, which is designed to help save money on natural gas and electric bills by using the strength of group buying. The commissioners agreed to a two-year extension for its electric contract for facilities.

The board also agreed to schedule another meeting with Hoffman to learn more about a new program that could save the county more money over the course of its next contract.

In other action, the commissioners approved the following: