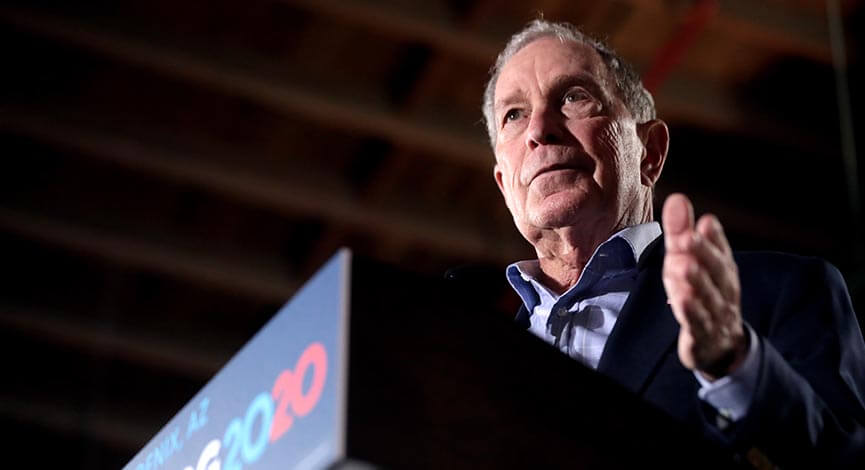 The last-minute boost to Jamie O’Leary’s campaign could not have come at a better time.

Locked in a five-way race for an Ohio State Board of Education seat, O’Leary’s main opponent had already received the support and financial backing of two major teachers unions.

All thanks to Mike Bloomberg.

Ultimately, O’Leary finished second in her 2016 election. That a first-time candidate like O’Leary ran a competitive race at all can be largely credited to support from Bloomberg and financial ties to him.

Her connections to the Leadership for Educational Equity (LEE), a nonprofit group based in D.C., netted O’Leary nearly tens of thousands of dollars in donations from the organization and members of its leadership board. Emma Bloomberg, the presidential candidate’s daughter, sits on the board.

Bloomberg ignored several high-profile elections in Ohio during the 2016 cycle and instead gave $10,000 to O’Leary, a self-described “obscure candidate” for a low-key Ohio State Board of Education 6th District seat.

In an email, O’Leary speculated that her support from Bloomberg reflects his “efforts to support candidates who are former teachers and who are driven by principles of student equity.”

Bloomberg’s involvement in a state board of education race 500 miles from home showcases his complicated web of political connections stretching back to the 1980s and extending from coast to coast.

The financial and political roots of the three-term New York City mayor, business mogul and philanthropist do not extend as far in Ohio as in other places. Federal Election Commission records show he has supported hundreds of candidates from both political parties throughout the country, from Republican John McCain in Arizona to Democrat Chuck Schumer in New York, but few in Ohio.

Years before his own political career began in the shadow of 9/11, Bloomberg’s spending was a matter of personal expediency. He donated to the Bush-Quayle ‘92 Primary Committee, then shortly after donated to the Clinton For President Committee as well.

Bloomberg stayed out of Ohio until he left the NYC mayor’s office. In late 2015, he donated $12,500 to the Leadership for Educational Equity’s Ohio PAC. The group used the funds to support a Democratic candidate in a crowded primary race for the Ohio House of Representatives’ 31st District in Cincinnati.

Ben Lindy, like O’Leary, had educational ties with LEE. Lindy is the founding executive director of Teach For America in Southwestern Ohio, part of a national initiative to recruit college graduates (of non-teaching majors) to teach in struggling school districts. Over the years, LEE has worked to support candidates for public office who are affiliated with Teach For America.

Lindy’s campaign committee brought in thousands of dollars from LEE and received help from the group in the form of “candidate coaching,” records from the Ohio Secretary of State show. Also like O’Leary, Lindy finished runner-up in his race. (He would later win election to the Cincinnati Public Schools’ Board of Education in 2019, thanks in part to financial backing from LEE.)

Bloomberg in the Buckeye State

Bloomberg has made most of his political inroads here while as a presidential candidate.

Just days before filing to run, he donated $10,000 to the Ohio Democratic Party as part of broader effort to support Democratic interests around the country. Within a short time period in November 2019, he donated to the state parties in 47 different states, along with nearly $320,000 to the Democratic National Committee and $800,000 more to the Democratic Grassroots Victory Fund. (It wouldn’t take long for the DNC to alter its debate qualification rules, allowing the self-funded candidate on stage despite not having a requisite number of grassroots donors.)

Bloomberg made an early campaign stop in Chillicothe, where he met with Mayor Luke Feeney and joined health care professionals for a roundtable discussion on opioids.

When it came time to open a campaign office in Athens, 60 miles east of Chillicothe, Feeney was on hand to endorse Bloomberg for president. Another featured guest was Maya Lin, a local native known for having designed the Vietnam Veterans Memorial in Washington D.C. Lin is on the board of directors for Bloomberg Philanthropies, the billionaire’s charity arm.

He is outspending his competition nearly tenfold since joining the race. Over the past 90 days, Bloomberg’s campaign has spent $2.46 million on Facebook ads in Ohio. The second-biggest Facebook spender over that time period was President Donald Trump’s “Make America Great Again Committee,” which spent $289,000.

The campaigns of Tom Steyer, U.S. Sen. Elizabeth Warren and U.S. Sen. Bernie Sanders are also among the top 10 Ohio advertisers on Facebook, along with entities such as ExxonMobil and the Partnership for Drug-Free Kids.

Facebook is a major focus for the Bloomberg campaign, which in essence has an unlimited amount of money from the candidate to spend. Bloomberg skipped the initial Democratic primary states, instead turning his attention to the 14 “Super Tuesday” states which will vote on March 3. These include delegate-rich states like California, North Carolina, Texas and Virginia.

In total, Bloomberg is the top Facebook spender in 29 different states in the past 90 days.

It is clear that Bloomberg has an advantage in Ohio over his primary opponents in terms of advertising and on-the-ground staffing levels. Will that lead to success at the polls? Perhaps not, oddsmakers report. FiveThirtyEight gives Sanders a two-thirds chance of winning the Ohio primary, owing to his success in the early contests of Iowa, New Hampshire and Nevada. The results of Super Tuesday and subsequent March 10 contests will greatly impact candidates’ chances headed into Ohio later that month.

One thing is for sure: Bloomberg has the resources to compete in the Buckeye State. How that may pay off electorally is still to be determined.