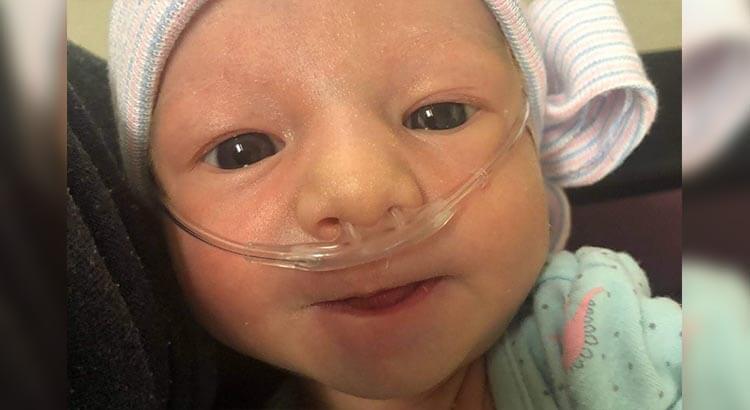 Lillian Grace Borden was born September 5, 2019. “She was not distressed at birth, we held her, she cried, we cried, all was right with the world,” her parents, Shari and Patrick Borden, said.

But according to a GoFundMe page setup by the Bordens, a nurse noticed some small clue that something was wrong. Lily wasn’t moving her limbs quite right.

She notified an orthopedic specialist who agreed something wasn’t right. They ordered an MRI and there it was—an ominous spot on her brain stem. By then Lily’s breathing had become compromised so they whisked her off to NICU and placed her on a breathing tube and gastric feeding tube.

“Your baby has brain cancer,” the medical staff said.

“As a parent, there is no way to prepare for those words. One minute you’re living your dream, the next minute, a doctor is telling you your beautiful angel you’ve waited your whole life for will likely die,” Lily’s parents said. “How could this be? The sonograms were completely normal. No one talks about baby brain cancer. Most people likely don’t even know babies get brain cancer, but our little Lily was born with it.”

The Bordens said on their GoFundMe page:

“By the time of her next MRI, just days later, the tumor was larger and now ran from her brain stem down her spinal cord to below her shoulders. They offered little hope—the tumor was inoperable and growing aggressively—but proceeded with a biopsy. The results indicated the tumor was an aggressive stage 3-4 malignant glioma. A tiny ray of hope existed in a recently approved targeted chemotherapy for tumors of a certain genetic makeup. But they needed to act fast if there was to be any chance of saving Lily.

First the insurance company needed to approve the genetic testing. Once approved, they performed a biopsy on the tumor. When the results came back, they needed the insurance company to approve the brand-new targeted therapy. All of this took precious weeks. Meanwhile, the tumor continued to grow. With no time to lose, the team forged ahead with general chemotherapy in hopes of slowing or stopping the growth. Lily had received her first treatment and follow-up MRI. The tumor was slightly smaller and some of the fluid around it had reduced! By the time the second round of treatment was scheduled three weeks later, they had received approval for the targeted therapy. Her first MRI three weeks after use of the targeted therapy showed NO SIGN OF THE TUMOR.

Lily was finally released to come home in late November, but traveled back to Oakland for three more week-long targeted therapy sessions. On January 25, 2020, the day we had been praying for finally came after nearly five months–Lily rang the bell signifying the successful end of treatment.”