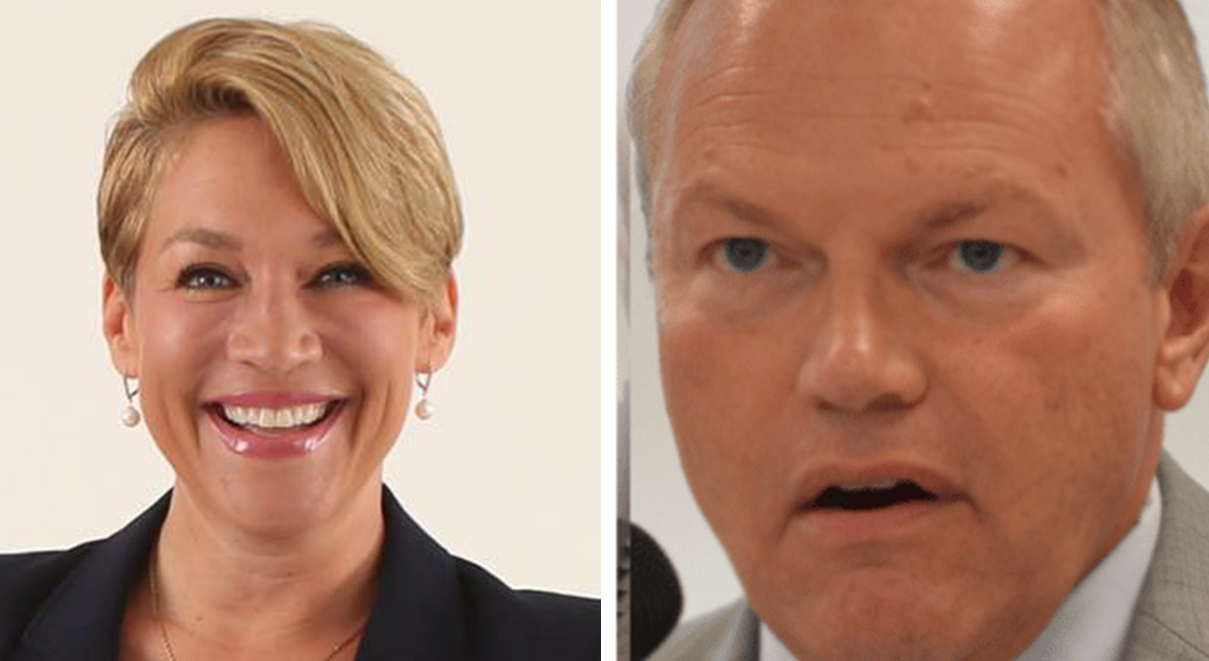 TIFFIN — Tensions are continuing to escalate in the Republican primary race for the 26th district Ohio Senate seat.

Ackison is a co-owner of Ackison Surveying, LLC, a Better Business Bureau-accredited company.

Reineke’s campaign said Ackison has a “disastrous industry record,” blasting her for being fined $4,000 by the Ohio State Board of Registration for Professional Engineers and Surveyors.

“A review of emails and minutes from the Ohio State Board of Registration for Professional Engineers and Surveyors reveals an extremely troubling record of illegal activity for Ackison’s company, with multiple violations of the Ohio Revised Code,” Reineke’s campaign manager, Caleb Stidham, said in the press release on Thursday.

Reineke’s campaign pointed out that Ackison’s business license is currently on probation for two years as the company failed to pay the $4,000 fine, which stemmed from Ackison’s company “admitting to engaging in surveying without a proper license as required by law.”

Ackison admitted in a Facebook Live video on Thursday shortly after Reineke’s press release was sent out that her company was indeed fined $4,000 and had its license suspended temporarily.

“Coincidentally, when I was running for federal senate, surprise surprise… Institutions of government started coming out of the woodwork, and my husband was pulled in for an investigation — an investigation that lasted for 9 months,” Ackison said in the video.

Ackison defended her decision to not pay the $4,000 fine on time, which resulted in the company’s license being suspended temporarily.

“Just so you know, we are not under any level of suspension. Were we temporarily while I was going down to the House and Senate fighting for legislative reforms? You’re dang right we were. I wasn’t going to just to pay somebody money from the government who already takes far more than they deserve anyway. They’ve always got their greasy, dirty, grubby hands out asking me for more money,” Ackison continued.

“We were fined $4,000 for an infraction that the Ohio Revised Code specifies no more than $500 is to be put in place,” Ackison said. “We absolutely said, fine us, you can suspend our license, you can do whatever you want, we won’t perform surveys, but what we will do is we will fight back.”

Reineke’s campaign also attacked Ackison for “hiring a convicted felon” to do work for her business.

“The Ackison Surveying company employed John Rutter, Jr. who has three past felony convictions involving drugs and weapons and was suspended by the Board from doing surveying work,” the press release from Reineke’s campaign states.

“Bill Reineke, Dollar Bill out-of-touch Reineke, you make fun of the fact that my husband and I support a second chance program. I have in the private sector, I was an executive in the private sector, always believed that we could work with non-violent offenders or even offenders that made a mistake as long as they weren’t violent, sexual crimes, to get folks up-and-running and back to work,” Ackison said. “Yes Bill, there are people who made mistakes, and yes Bill Reineke, there are people who have paid their debt to society who are now trying to do what they can to work.”

Ackison says the fines against her business are the result of an “intrusive government” with regulations “on par with New York and California,” as well as “institutions of government” attempting to take her down.

“Unlike you, I wasn’t born as an heiress to an immense car dealership. I wasn’t born to be a tycoon. I came from the bottom and I had to work and claw my way up to the top despite the government breathing down the back of my neck every time I turn around to make a life for myself, to run my farm, to run my surveying company, to run our excavation company,” Ackison said. “You know what Bill Reineke, I still had time, as a private citizen, to go out and to activate myself and get legislative reforms for things that mean something to the people.”

“I know you’re scared, you’re scared to death. You’ve never had a candidate like me who’s coming up against you. You’ve never lost anything in your entire life, and you’ve been able to buy your way every place that you need to go, but it’s not going to happen for you this time,” Ackison said of Reineke. “You must have a tremendous amount of pressure having a middle class woman who lives on a farm, operates a small business, and is highly-respected in the conservative community breathing down the back of your neck right now.”

Reineke’s press release on Thursday came as he was endorsed by the Ohio Society of Professional Engineers and Professional Land Surveyors this week.

“This attack is another example of Bill being out of touch with real world issues and the complete disconnect he has with this district who has spoken loud and clear that Melissa Ackison is their chosen conservative warrior,” Ackison said.