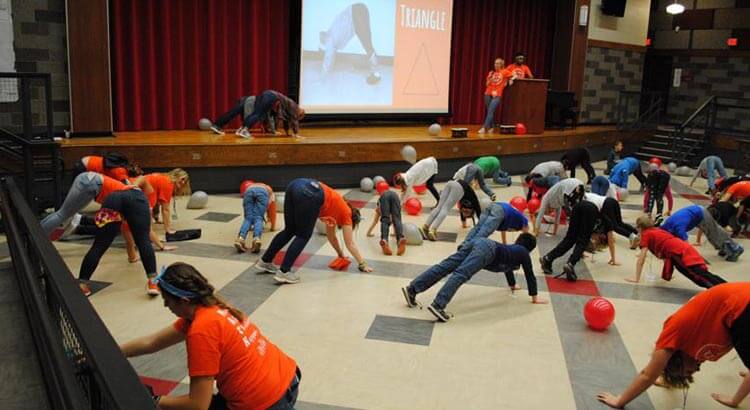 TIFFIN (BergWire) — It was a good sign when Math Camp co-leaders and fellow education majors hosted 40 students for Collegiate Camp on campus in October. From that jumping-off point, the Math Club has soared with a variety of community and peer outreach activities designed to make math fun.

The fall semester was busy and the spring semester promises to be even busier.

At Collegiate Camp, junior Autumn Simpson, Math Camp publicist, explained that students, plus 30 mentors and four prospective students, participated in all of the activities that would be typically carried out at Math Camp. “It just gives students insight into what kids will go through (at Math Camp),” she said.

In its second year, Math Camp has expanded to one more local elementary school. ‘Berg students – primarily education majors – conducted the daylong interactive event at Hopewell-Loudon School on Saturday, December 7, following the inaugural Math Camp at Noble Elementary School last March. At H-L – the first official kids camp the ‘Berg students ran entirely on their own – 32 third- and fourth-graders spent the day learning the fun side of math.

“It was definitely one of those ‘This is why I do what I do’ moments,” Autumn said.

According to education professor and Math Camp adviser Dr. Lindsey Haubert, the day is about making math fun, yes, but it’s also about “trying to develop a positive disposition about math in the participants.”

As the program gains steam, people are hearing more about the impact it’s making and want to get it on it, Autumn added.

The ’Berg students who conduct Math Camps also experience an inherent benefit, Lindsey said. “There’s the additional interaction with students, but also an opportunity for us to practice our skills outside of the classroom and develop into teacher leaders,” she said.

The students feel their confidence growing, too. “This lets us refine our craft in a non-traditional classroom,” said junior ed major and Math Camp co-leader Abe Patterson. “We become more confident in teaching math and that carries over to other subject areas as well. It just gets you thinking in a new realm.”

Upperclass students are hoping that Math Camp catches on with their younger classmates, according to junior ed major Anna Cavanaugh, who is also a Math Camp co-leader.

About 20 members of the Heidelberg University Council of Teachers of Mathematics also attended the Ohio Council of Teachers of Mathematics conference in Sandusky Oct. 24-25. While there, the students – with lead Lauren Nichols and the Math Camp Mentorship Team providing support – presented about the work they’ve done to establish and conduct Math Camp.

“We also attended sessions and brought back innovating ways to teach math that we can use at future Math Camps and in our classrooms,” Anna said.

Others have taken notice of ’Berg Math Camp’s success.

Just as Bowling Green State University provided peer mentorship, now Heidelberg students are doing the same for their counterparts at the University of Toledo. “UT approached Dr. Haubert about what we do and asked if we would go up and share with them,” Anna said.