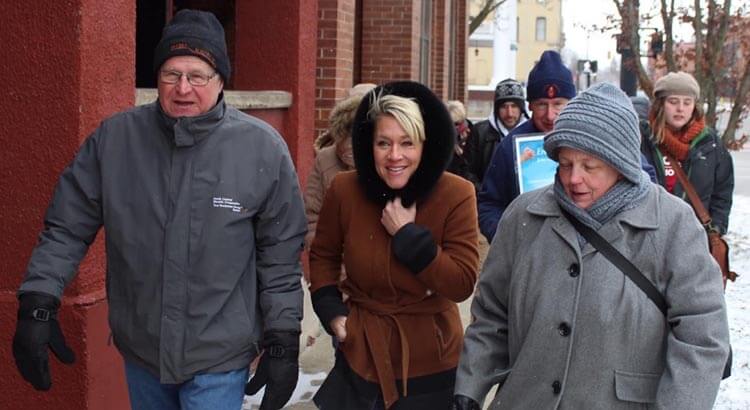 First, Ackison participated in the Tiffin Ecumenical March for Life, organized by Tiffin Right to Life. The march started at St. Joseph Catholic Church, proceeded to Courthouse Square for a brief update, and concluded at St. Mary Catholic Church.

Then, Ackison, who is running for the 26th district Ohio Senate seat in a heated Republican primary against State Rep. Bill Reineke (R-Tiffin), shared her vision with voters during a meet & greet event held at Tiffin AMVETS Post 48.

Ackison spoke about a variety of topics during the event, including Second Amendment rights, abortion, the economy, and education. Ackison also addressed issues specific to Seneca County, including the Sunny Farms Landfill and the development of wind turbine farms.

“Thank you Tiffin Right to Life, members from the Seneca Anti-Wind Union and members against the landfill for all of your support,” Ackison said in a Facebook post after the events.

Ackison previously shared that she went through an abortion procedure as a teen and although she is now active in pro-life ministries and groups, supporters of her opponent, Bill Reineke, may try to use it against her.

“I’ve never had childhood trauma condemn me to eternal damnation,” Ackison said. “For those who have been to post abortive retreats with me or know my testimony (it’s not a secret) they know about my very deep personal experience with an abortion as a child and what goes on inside the clinics of a Planned Parenthood.”

“I remember the first time I met with national pro-life leaders about my story and we just cried,” she said. “I’ve been speaking at pro life events and private ministry for many many years. I was forgiven along time ago,” Ackison said.

“As an independent business owner and mother of four boys, I know what it’s like to struggle and make ends meet. Our political climate in Columbus is in shambles. It seems these politicians get elected, get comfortable in Columbus, cozy up to lobbyists, and leave the hard working men and women of this great state behind in the process. I fight to brighten the path for you and your family,” Ackison said.