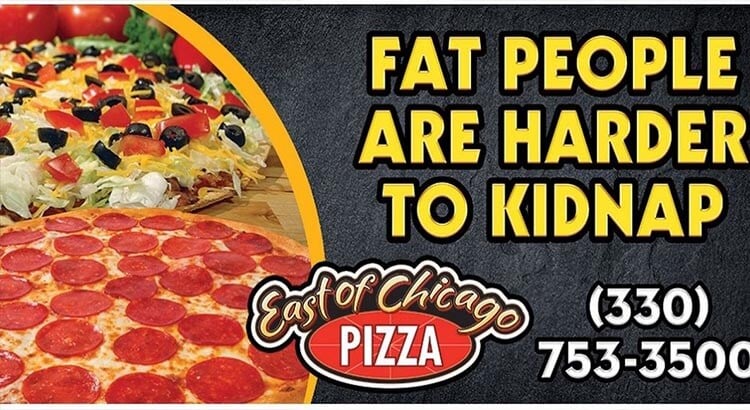 BARBERTON, Ohio — An Ohio pizza shop’s billboard has been taken down after receiving criticism.

“Fat people are harder to kidnap,” the billboard reads.

The slogan was the idea of Jeremy Clemetson, who owns East of Chicago Pizza in Barberton, WOIO reported. He said be began putting up amusing billboards about six months ago.

“I scour the internet for different signs that people had. Sometimes I use them and sometimes I re-invent my own,” said Clemetson.

In regards to the latest billboard, Clemetson says he “discussed the sign with a few people and everyone thought it was funny,” so he placed it on their front sign and no one said anything initially.

While Clemetson says he never meant to offend anyone, some customers were furious. January is national human trafficking awareness month, and some say the sign is insensitive.

Clemetson said he took it down from in front of his store after corporate headquarters received a complaint.