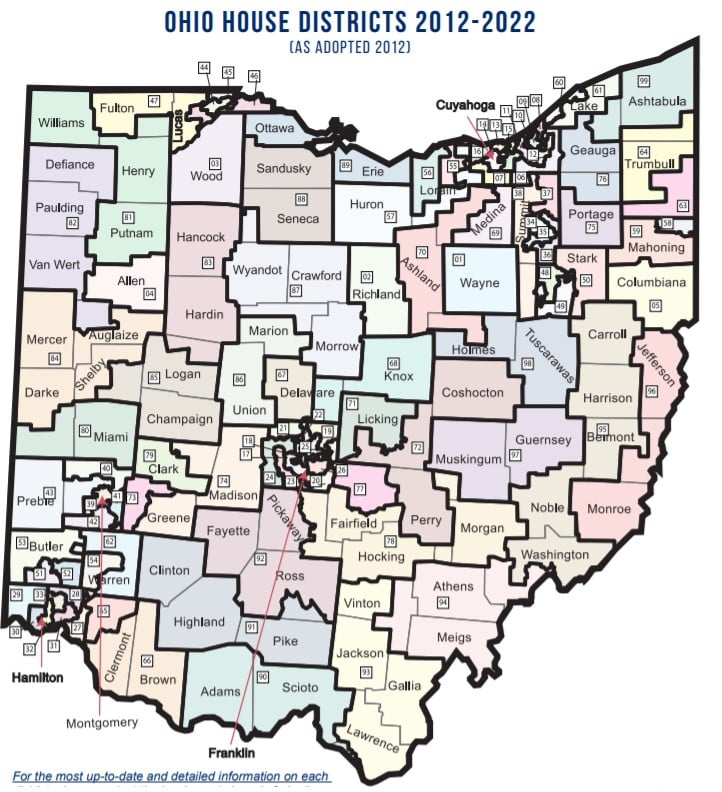 For decades, Ohio has been the quintessential battleground state. But in the last 10 years, Ohio has steadily taken a turn to the right — but not because its voters have suddenly become more conservative. Sure, Republicans enjoy supermajority control of both state legislative chambers and hold three quarters of the congressional delegation, but that doesn’t really tell the whole story.

What does? Our gerrymandered maps — drawn in near total secrecy in the summer and early fall of 2011 in a private controlled-access hotel room in downtown Columbus aptly nicknamed, “The Bunker.”

The maps are masterful in the way they perform exactly how they were meant to by providing Republicans the ability to shore up political power they simply cannot win under a fair system. Since the current map was put in place, Republicans have held 12 of the state’s 16 congressional seats.

The incredible impact of this imbalance in vote-to-seat ratio has consequences that last well beyond election day. The results of gerrymandering has meant a decade of the Ohio General Assembly attempting to one-up itself in its ability to introduce bills that are each more outlandish and unsupported by Ohio’s voters than the last.

The most recent examples came last month when legislators introduced two new extreme bills — neither of which address issues in the way Ohioans support.

The first was a “Stand Your Ground” bill that came, at that point, 103 days following the tragic Oregon District shooting in Dayton, Ohio. More than 10 bills sit rotting away before the Ohio legislature that could codify common-sense gun reform into law.

Most of those bills, including both a universal background check and a red flag law, were introduced in January of this year. But not a single one of them has gotten any real attention or any real number of hearings. It’s not clear that any of them will see movement before the year’s end. And despite saying otherwise, Gov. Mike DeWine unveiled his gun reform bills and removed a universal background check measure – something that a whopping 90 percent of Ohioans support. You’d be hard-pressed to name any other policy about which 90 percent of Ohioans agree.

Facing a crowd of Daytonians gathering to honor the deceased and the first responders who bravely answered the call, DeWine was interrupted when the crowd began shouting for him to, “Do something.” When Ohioans called on their governor and legislators to do their job, they certainly did not mean for them to ignore their will and sit on a number of common-sense reforms. Nor did they envision the introduction of a new Stand Your Ground bill.

This issue illustrates the impact gerrymandering has on the everyday lives of Ohioans. We are less safe because the legislature refuses to take action on a common-sense gun reform bill with popular support. And voters are unable to vote them out of office because of the way district lines were manipulated.

Gun legislation isn’t the only area where lawmakers are ignoring Ohioans. Just two weeks after the introduction of the Stand Your Ground bill, state Reps. Candice Keller, R-Middletown, and Ron Hood, R-Ashville, introduced an outright abortion ban. This new bill would criminalize the people who seek and perform abortions, punishing them with murder charges and, in some cases, sentencing them to death. Yes, you read that right. The bill also requires physicians to, if applicable, transplant ectopic pregnancies — a procedure which is not medically possible.

This bill — much like the six-week abortion ban that passed earlier this year and has been blocked by a federal court — is dangerous, unconstitutional, and unsupported by Ohio’s voters. It’s hard to tell, given the speed at which the Ohio legislature introduces bills attacking access to abortive services, but 61 percent of Ohioans support the right to get an abortion.

Again, the Ohio legislature knows that they can get away with turning these unpopular bills into law because they are protected from accountability by gerrymandered maps.

These two recent examples stand out, but they’re certainly no exception to the simple truth that the legislature simply does not reflect Ohio’s voters nor represent the people’s interests. Rather than living in a state where voters choose their representatives, Ohio’s representatives choose their voters – decidedly not how democracy is supposed to work and a real sign that our political system in Ohio is broken.

For the last 10 years, Ohioans’ right to fair representation has been outweighed by an interest to ensure lopsided partisan victories that belie the purple nature of Ohio’s electorate. But in 2021, the reality of giving the power back to the people by drawing fair maps is actually possible thanks to crucial redistricting reform measures that Ohio’s voters overwhelmingly supported. And when Ohio’s legislators and Redistricting Commission pick up their pens to start the map-drawing process, citizens will be watching — and they’ll be ready to engage in the process and demand the fair maps they’re constitutionally guaranteed.

Katy Shanahan is the Ohio State Director for All On the Line, a grassroots advocacy organization that is part of a national effort to end partisan gerrymandering and a program affiliate of the National Democratic Redistricting Committee.

Republished with attribution from the Ohio Capital Journal.