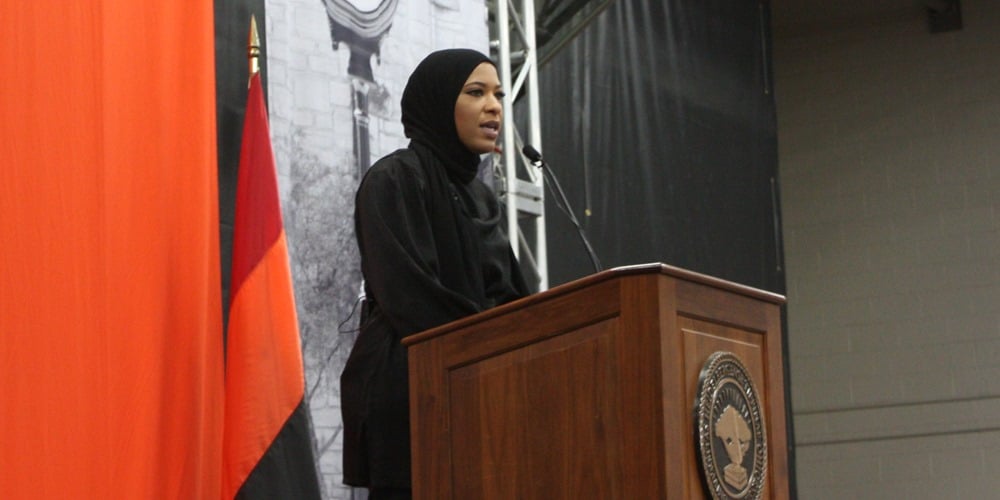 TIFFIN — Ibtihaj Muhammed, the first Muslim-American woman to earn a medal at the Olympics, spoke at Heidelberg University on Tuesday as part of the university’s HYPE Career Ready program.

Muhammed shared her story to the Heidelberg community and spoke about conflict management, one of the many skills focused upon in the university’s HYPE program.

As a young Muslim-American athlete, Ibtihaj Muhammed struggled with the restrictions wearing a hijab imposed on the requisite sport uniforms – until she discovered fencing and finally felt she could be true to herself.

She attended Duke University, where she was a three-time All-American and the 2005 Junior Olympic Champion. A member of the U.S. National Fencing Team, Ibtihaj jousted her way into the history books at the 2016 Summer Olympics in Rio de Janeiro wearing her hijab, ultimately helping the women’s fencing team earn a bronze medal.

In 2018, she published her memoir, “Proud: My Fight for an Unlikely American Dream,” which details her journey to become the first athlete to compete in hijab for Team USA.

Ibtijah serves on the State Department’s Empowering Women and Girls Through Sport Initiative as an official sports ambassador.

Heidelberg’s HYPE Career Ready program prepares students to bridge the gap between academics and life skills so you can stand out in an increasingly unpredictable and competitive world.