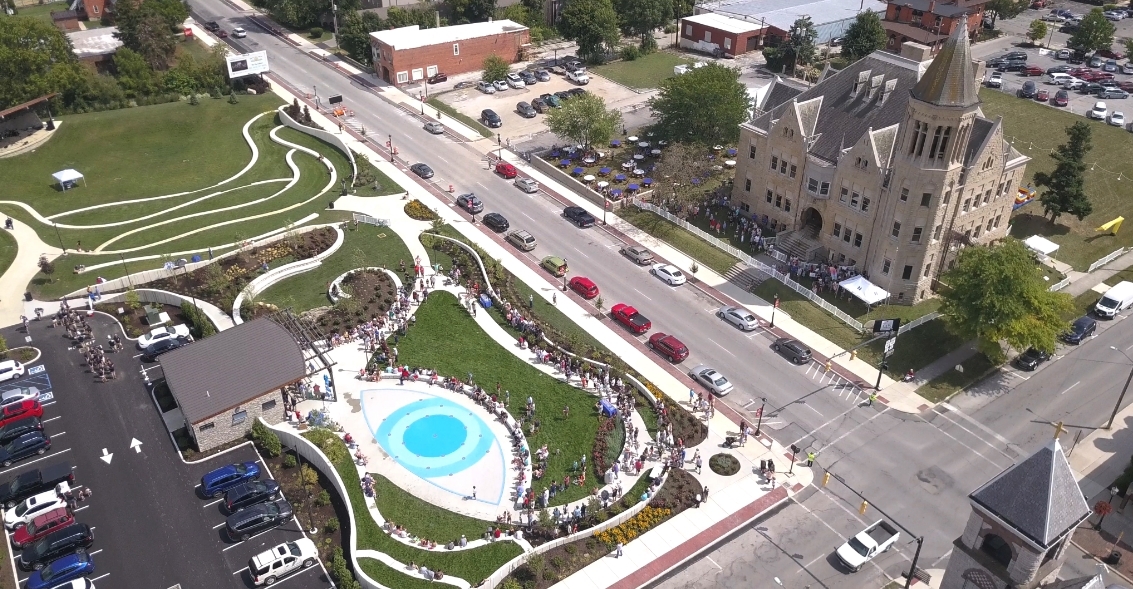 Downtown Tiffin, Ohio, has made a major splash in its continuing renaissance.

Thanks to the philanthropy and community activism of National Machinery LLC, its foundation, and its founding family, a stunning downtown park with a creative splash pad area has opened to the public.

Located just one block from the main intersection of downtown Tiffin, the 2.5 acre East Green complex is the vision of Andrew Kalnow, the CEO and major owner of National Machinery, a 145-year old manufacturing firm that is a global leader in cold forming equipment and technology.

A summer concert series has been organized to stage at the amphitheater top quality music performances by musicians from the greater region.  (See the website for more information and photos of the amphitheater: www.eastgreenconcerts.com.)

On August 19 the companion urban park to the amphitheater was dedicated as “National Corner.”  The park boasts the same curvilinear architectural style as the amphitheater, as well as a smaller pavilion for public restrooms that matches the large stage pavilion at the adjacent amphitheater.

A high tech splash pad is the main feature of the park with a repertoire of several programs and a colored light fountain display at night. The splash pad area even has its own mini amphitheater hugging the aquatic area.

The park is richly landscaped with various flower beds spread along the curvilinear perimeter wall, as well as a secluded garden with waterfall to be discovered and enjoyed.

Throughout the day over 1200 people visited the East Green to partake in the ongoing events including the “National Corner” dedication and celebration, and music fest at the Frost-Kalnow Amphitheater.

The East Green complex that includes both the new National Corner urban park and the amphitheater is owned and overseen by the East Green Foundation.