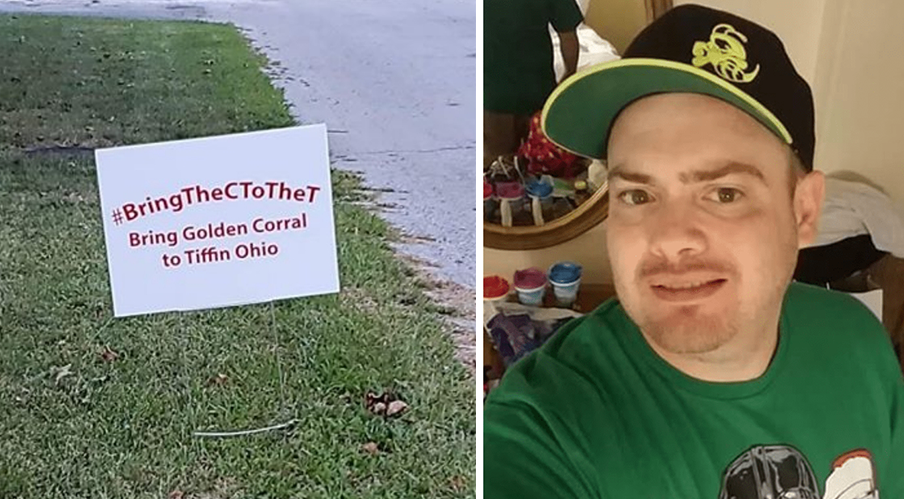 A local man is ramping up his efforts to bring a Golden Corral buffet-style restaurant to the city of Tiffin.

#BringTheCToTheT is a campaign started by Tiffin local Damien Hill, who on Thursday told TiffinOhio.net News that he has just received his order of “campaign yard signs.”

“The yard signs are in and will be distributed Sunday,” Hill said.

Hill says his campaign is designed to encourage the corporate leaders of Golden Corral to consider opening a restaurant in Tiffin.

“At this point it’s still in the early stages,” Hill said. “But publicity is what we are going for to help further our efforts.”

“Golden Corral to me is an event,” Hill said. “It’s the place my daughter had her first bite of non-baby food. Its wholesome family atmosphere is welcoming to all and its affordable prices make it a must stop for every family.”

“It’s got something for everyone. Being a picky eater myself, it’s a place the whole family can agree on,” Hill continued. “For those who say you can’t go home they are wrong you can always go to a Golden Corral and that’s what I want for Tiffin.”

Golden Corral, based in Raleigh, N.C., is the nation’s largest grill-buffet restaurant chain with 489 restaurants operating in 42 states. Golden Corral is famous for its variety, including USDA steaks cooked to order, smoked meats, awesome pot roast, hot yeast rolls, and desserts like homemade carrot cake and the Chocolate Wonderfall®.

Some in the community have compared Hill’s campaign to Mayor Aaron Montz’s social media campaign a few years ago to bring Chipotle to the city.

Montz started tweeting at Chipotle every day in 2015 until they agreed to open a store in the city in 2016.

But the campaign isn’t without some haters.

“We don’t need a f**king hog trough restaurant in Tiffin,” one local woman commented on a Facebook post regarding the campaign.

“No disgusting buffets. We need more stores!,” another resident said.

Do you think Tiffin needs a Golden Corral? Let us know in the Facebook comments.