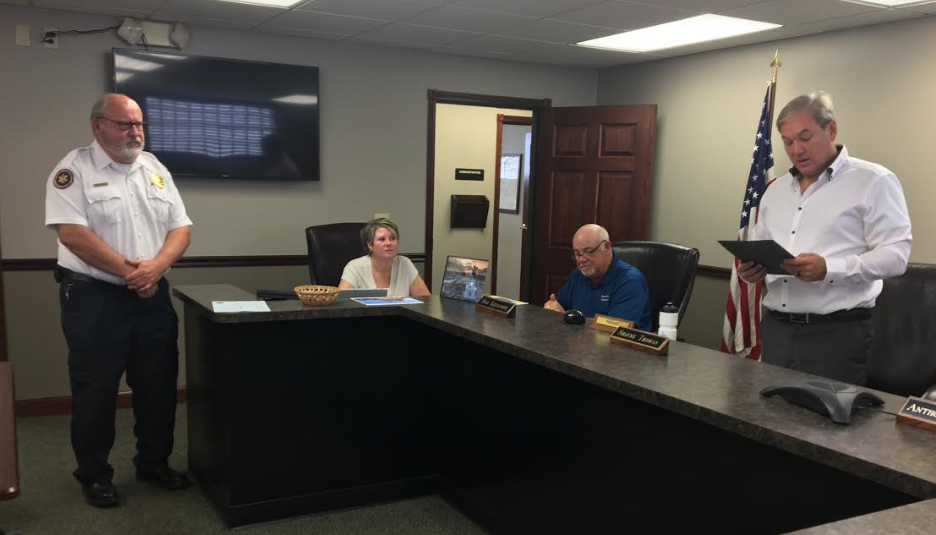 TIFFIN, OH — The Seneca County Board of Commissioners spent its Thursday work session hearing an update from Craig Gossman, of the Gossman Group, on the county’s Facilities Master Plan.

The plan is to inventory county-owned buildings and to outline potential futures for them. In January, the commissioners tabbed Gossman Group to create the plan. Gossman presented some major points Thursday that are to be included in the plan, but it isn’t expected to be finalized until December.

Gossman displayed some sample pages to familiarize the commissioners with the layout of the document and gave some “big ideas” that should be present throughout the plan. The “big ideas” included sustainable practices, consolidation, improved farm campus, wayfinding and health and wellness.

Gossman said county-owned buildings and property at the south end of the county could be changed to create more of a campus, as opposed to fragmented buildings that have no connectivity. During October, a draft of the document is to be shown to stakeholders, after those meetings the feedback will be incorporated, and the plan is set to be finalized in December.

Commissioner Shayne Thomas said when the plan is complete, some of the projects within it have a good likelihood of being grant-funded. This is because plans of this nature help grant applicants score more points for competitive funding.

Commissioner Mike Kerschner thanked Gossman and stressed the importance of planning. “If you don’t know where you’re going, any road can get you there,” he said.

In other action, the board presented a proclamation to Seneca County Emergency Services Director Ken Majors for achieving 30 consecutive years of National EMS Paramedic Certification.

For more details on Majors’ achievement, see the story here.

Also during the meeting, the commissioners agreed to table two resolutions that would have rescinded and replaced the 2016 Road Use Maintenance Agreement to reflect that some townships had withdrawn from the agreement to negotiate their own.

The only change to the 2019 proposed agreement is that some townships are left off it. The discussion is expected to continue later this month when Zimmerman is available to answer questions about the document.

Kerschner said he thought changes to the RUMA may be necessary with potential industrial wind turbine projects locating in the county. “These are extraordinary projects, I don’t want the ordinary RUMA to apply,” he said. The commissioners also unanimously agreed to direct DeVine to submit a statement of issues and concerns to the Ohio Power Siting Board related to the Republic Wind Project.

The issues will be addressed as part of the county’s cross-examination of expert witnesses brought in by Republic Wind during the OPSB adjudicatory hearing. That hearing is scheduled for Oct. 2, but DeVine has petitioned for a two-month continuance.

Some of the issues included in DeVine’s statement are related to noise, birds and bats, groundwater pollution, karst zones, public safety, shadow flicker, the county airport, funding and training for fire and EMS personnel and road use and repair.

* Re-designating Fund Number 8127 as the USDA Grant Fund on behalf of the Mental Health and Recovery Services Board of Seneca, Sandusky and Wyandot Counties.

* Certifying unpaid assessments to the county auditor for collection per the Ohio Revised Code.

* Authorizing the disposal of unneeded, obsolete or unfit county property – a 2015 Ford F-250, on behalf of the Seneca Conservation District.

* Declaring real property at 801 Kirk Street, Fostoria, no longer needed for public use and authorizing the sale of said county-owned property. Sealed bids for the property are to be opened Oct. 3 at 10:15 a.m. at the commissioners’ office.

* Entering into the Issue I Round 34 cooperative agreement with the Seneca County Township Board of Trustees.

* Submitting an application with the Ohio Public Works Commissioner State Capital Improvement and/or Local Transportation Improvement Program to execute contracts as required for Issue I Round 34 for Seneca County.