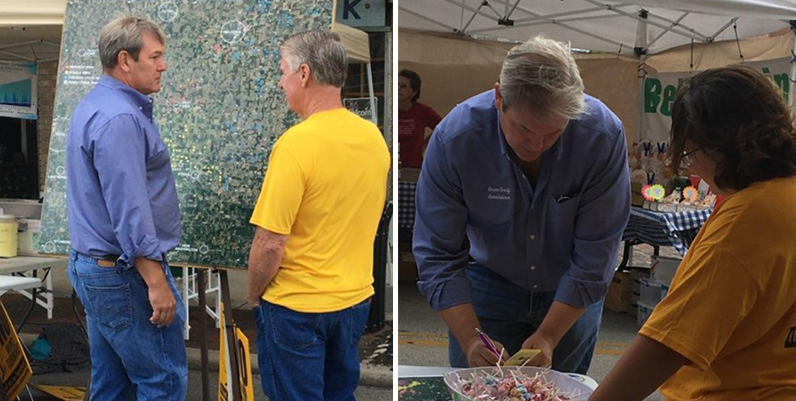 Tiffin, Ohio — Seneca County Commissioner Shayne Thomas paid a surprise visit to the Seneca Anti-Wind Union tent at the Tiffin Farmers’ Market on Saturday as he reportedly toys with a run for the Ohio state house.

Thomas spoke with several constituents at the tent regarding wind turbine projects, and even signed up to participate in SAWU’s raffle.

Thomas, a Republican, has been a leading proponent of wind turbine projects in the area.

A source familiar with his plans told TiffinOhio.net that Thomas intends to run for state representative of the 88th district, which includes Sandusky and Seneca counties, in the 2020 election.

The seat is currently held by State Rep. Bill Reineke (R-Tiffin), who is running in the GOP primary for state senate next year against conservative challenger and Marysville businesswoman Melissa Ackison.

Currently, the only candidate to officially announce their intention to run for Reineke’s seat is Gary Click, a controversial pastor from Fremont who is running in the Republican primary.

The entrance of Thomas or another Republican candidate into the race would set up a tough primary fight.

The source said Thomas could be starting to shift his views on wind turbine projects in the area, in part due to large public opposition.