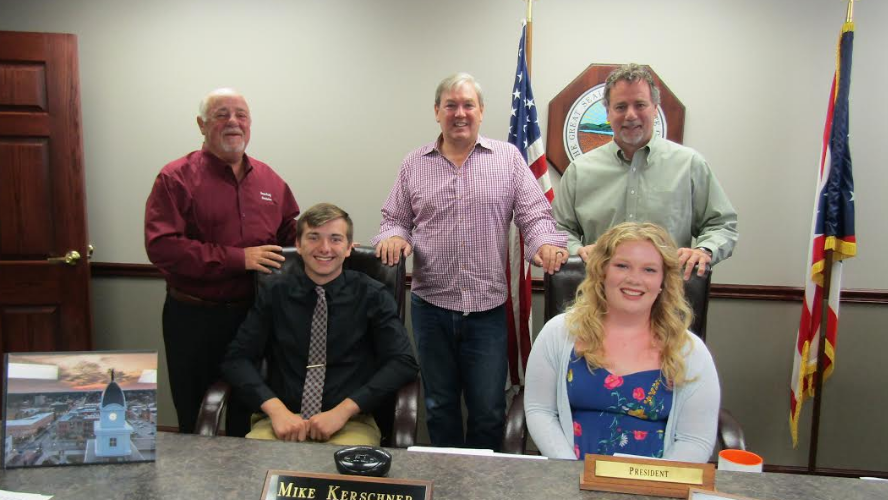 Jorie Fawcett and Corbin Hite each took a few minutes to discuss their projects with the board. Jocelyn Hardina also was recognized for her project, but she was not present for the meeting.

The commissioners signed and sent a letter to each of them congratulating them for being recognized for their hard work and dedication.

The letter states, “Your passion, hard work and dedication are shining examples to your peers, and we look forward to hearing more from you as you move forward into a bright future.”

Commissioner Shayne Thomas congratulated the students and implored them to consider keeping their talents in Seneca County.

In other business, Mircea Handru, executive director of the Mental Health and Recovery Services Board of Seneca, Sandusky and Wyandot Counties spoke to the board about the Targeted Community Alternatives to Prison grant.

The commissioners agreed to extend the program for two years. The purpose of the grant is to provide funds to local communities to effectively supervise, provide treatment services and hold accountable low-level, non-violent offenders in the community.

The county received the grant in 2018 and 2019 and the county will again receive $270,088 over the next two-year period. The grant helps to fund several programs that aim to rehabilitate low-level drug offenders, this includes the PIVOT Drug Court collaboration between Seneca County Common Pleas Court and Tiffin-Fostoria Municipal Court. Handru said he believes the PIVOT program is the best drug court program in the state.

Also during the meeting, the board welcomed new Seneca County Commissioner Anthony Paradiso. Paradiso was appointed by the GOP Central Committee to finish the term of former commissioner Holly Stacy. Paradiso’s term expires at the end of 2020.

“I really think Commissioner Paradiso came in and hit the ground running,” Thomas said. “I am excited to continue working with him.”

In other action, the board agreed to purchase a new truck for Weights and Measures personnel.

During resolutions, the commissioners approved a supplemental appropriation of $5,000 to fund a trip by Commissioner Kerschner to Japan.

In September, Kerschner will join a group including Ohio Gov. Mike DeWine, State Rep. Bill Reineke and Tiffin Mayor Aaron Montz. Kerschner said it is important for the county to be represented on the trip because of the success of prior visits to the country.

Those trips led to the establishment of several Japanese-owned businesses in Seneca County, including American Fine Sinter and Taiho. Those two companies are among the largest employers in the county.

By having many state dignitaries at the conference, the hope is to bring back economic development projects, investment and new jobs to the county and to the state.