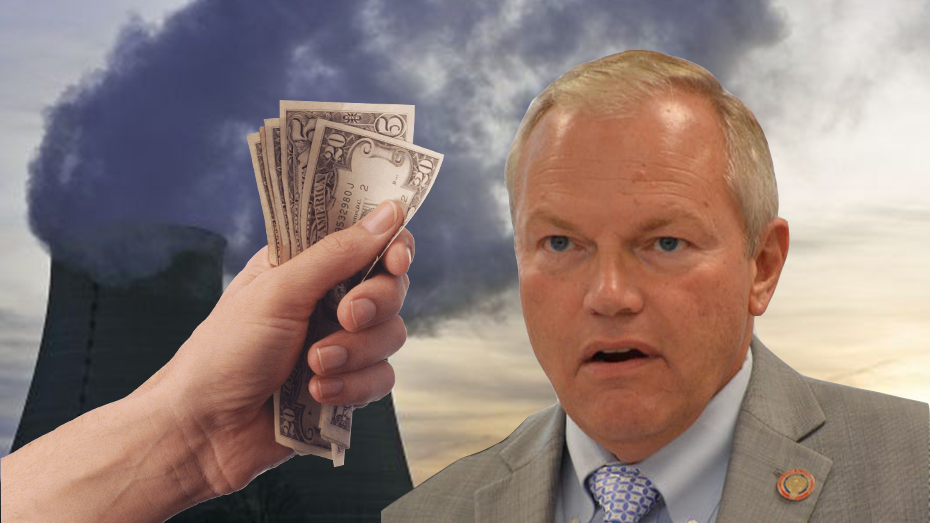 TIFFIN, OH (TiffinOhio.net News) — Members of the Ohio House, including State Rep. Bill Reineke (R-Tiffin), who voted in favor of a bill to bail out uncompetitive coal and nuclear power plants received over $320,000 in campaign money from four utilities that will benefit financially from the bill’s passage.

American Electric Power (AEP), Dayton Power & Light (and it’s parent company AES Corporation), Duke Energy, and FirstEnergy Corp.’s PACs have targeted Ohio with nearly $1.65 million in campaign cash since the start of 2017, according to data from the Federal Elections Commission.

According to a new report from Dave Anderson of the Energy and Policy Institute, forty of the fifty-three state representatives who voted for the power plant bailout bill, HB 6, received campaign contributions totaling $322,776 from these utility PACs during the same time period, including:

The bill, as passed by the Ohio House, would bail out the Davis-Besse and Perry nuclear power plants owned by FirstEnergy Solutions (FES). FirstEnergy Corp. is eager to sever all ties with its now bankrupt former subsidiary, but employees of FES continue to contribute money to FirstEnergy Corp.’s PAC. David Griffing, vice president of government affairs for FES, has contributed $1,650 to the PAC this year.

The bill would also extend bailouts to two coal-fired power plants operated by the Ohio Valley Electric Corporation (OVEC), of which AEP, Dayton Power & Light, and Duke Energy own shares. FES received a bankruptcy court’s approval to exit OVEC last year, though that decision is being appealed by OVEC.

Ohio’s energy efficiency and renewable energy standards will also be eliminated, meaning consumers will lose out on the electricity bill savings generated by those programs.

Ohio utility customers will pay $2 billion in nuclear subsidies to FES over six years if the Ohio House version of the bill becomes law, according to an analysis by the Ohio Manufacturers Association. AEP, Dayton Power & Light, and Duke Energy customers will together pay an additional $368 million for OVEC coal subsidies, according to a fact sheet from the Ohio Environmental Council Action Fund.

Over $67,000 in campaign contributions to Ohio House Speaker Larry Householder, and that’s not counting all the dark money linked to FirstEnergy

Ohio House Speaker Larry Householder, a top proponent of the bill, received a total of $67,415 from the four utility PACs. AEP was the largest contributor, and gave $30,000 to Householder’s campaign.

FirstEnergy was next with $24,415, and that doesn’t count the money from Generation Now Inc., a dark money group linked to FES that spent one million dollars to help Householder become speaker. The group has since purchased $8.4 million in ads supporting HB 6.

More than $123,500 in campaign contributions to the sponsor of HB 6

Over $123,500 in utility campaign cash went to the following sponsors and co-sponsors of HB 6:

The bill’s co-sponsors include members of the Ohio House Republican leadership, and the chairs of the committee and subcommittee that approved the bill before it was passed by the full House.

Vitale chairs the Ohio House Energy and Natural Resources Committee, which first considered the bill. In emails obtained by the Cleveland Plain Dealer, Vitale voiced support for the provisions of the bill that would eliminate energy efficiency programs that help low-income individuals and families save money.

“While this may sound mean to some, a little hunger in the belly or being a little cold on some really cold days is a good incentive for me to get up, go to work and provide for my 5 boys and wife,” Vitale wrote in the emails.

Hillyer, Cross, and Stein are members of Vitale’s committee.

Stein is chair of the Subcommittee on Energy Generation that also heard testimony on HB6. Cross and Hillyer also serve on the subcommittee.

HB 6 is just the latest bill to bail out uncompetitive coal and nuclear power plants in Ohio. The Ohio House considered earlier bills to bail out FirstEnergy’s nuclear plants and OVEC’s coal plants in 2017-2018, but those bills failed.

Below is a spreadsheet listing the campaign contributions that Ohio House members who voted in favor of HB 6 have received from AEP, Dayton Power & Light, Duke Energy, and FirstEnergy’s PACs since the start of 2017, along with sources for the data.

Dave Anderson is the policy and communications manager for the Energy and Policy Institute. Dave has been working at the nexus of clean energy and public policy since 2008. Prior to joining the Energy and Policy Institute, he was an outreach coordinator for the climate and energy program at the Union of Concerned Scientists. He is also an alumnus of the Sierra Club and the Alliance for Climate Protection (now the Climate Reality Project). Dave’s research has helped to spur public scrutiny of political attacks on clean energy and climate science by powerful special interests, such as ExxonMobil and the American Legislative Exchange Council (ALEC). His work has been cited by major media outlets, such as CBS News and the Wall Street Journal, and he has served as a speaker on panels at national solar industry conferences. Dave holds a MA in Political Science from the University of New Hampshire, where he also received a BA in Humanities.