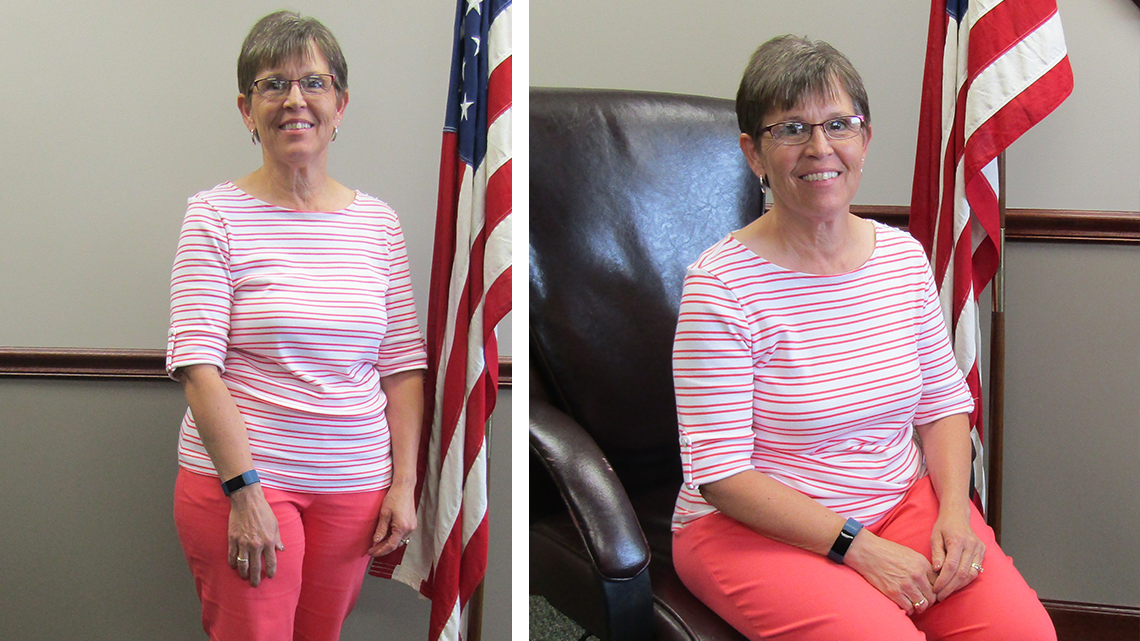 TIFFIN, OH (TiffinOhio.net News) — Commissioner Holly Stacy is reflecting on her time in office this week as she prepares to begin the next chapter of her life.

Stacy’s last day in office is Friday, July 19. She first became a commissioner in 2013 and has spent more than six-and-a-half years in the seat, working hard to improve the county.

She said when she began campaigning, her focus was to work hard to be a “full-time commissioner.”

“Some people used to view these jobs as part-time, some people still say that,” Stacy said. “I looked at it as something that needed and deserved full-time attention.”

Stacy said she hoped to build credibility and earn respect for the position. She helped to do this by doing her best to attend as many community events as possible, and if she couldn’t do it, she worked with the other two commissioners to attempt to have some representation from the office present.

“Maybe all three of us couldn’t make it, but it is good to have at least one,” she said.

Stacy also helped come up with the idea to hold one evening meeting outside of Tiffin each quarter. “It was for increased accessibility, it’s a conscious effort to do a better job. Some people can’t make it to a meeting in the morning. We do work on behalf of the entire county, it doesn’t have to be done in Tiffin,” she said.

She said she believes the diversity of her background helped her do the best she could as a commissioner. Prior to becoming a commissioner, Stacy served as the CEO/President of the Chamber of Commerce of Sandusky County for 10 years. She has also worked as a public involvement manager in the transportation industry for nine years.

One of the things Stacy is most proud of was her representation of the agricultural community. “Clearly, the focus and interest was not on a single agenda item, but just knowing the importance of ag for this county, we wanted to make sure we could locally continue to provide services here,” she said, adding that not all counties have their own ag center.

Stacy said when she first started the job in 2013, the opening of the Seneca County Youth Center and the Seneca Crawford Area Transportation garage occurred. She also said the county began focusing on the future of emergency medical services in the county. This led to the creation of joint ambulance districts, which has helped stabilize EMS in Seneca County.

She said she came into office with a commitment to not increase fees or taxes on residents, and she continued to keep to that commitment throughout her time in office. “I tried to be fiscally conservative and be a good steward of the taxpayers’ money,” she said. Stacy remarked that the local economy is doing well, and she thought it was interesting to see how county revenues have increased since she started.

The General Fund budget in 2013 had revenue of about $14.6 million, while the 2019 General Fund budget had certified revenue for $17.8 million, an 18-percent increase. In 2015, the county established a local Transportation Improvement District, which has led to various grants to help fund road improvements. The county also started its land bank, which brought millions of dollars into the community to help clear blighted properties.

Also in 2015, the location of the Seneca County Justice Center was chosen. Stacy said in 2016, major planning for the justice center occurred.

“I was very adamant that this be the people’s courthouse,” she said. “We wanted to give residents many opportunities to connect themselves to their justice center. We had behind-the-scenes tours, several public meetings, a topping off ceremony, a cornerstone ceremony with the Ohio Masons and more.”

Stacy said she also worked hard on a time capsule in the building that will be opened 50 years from when it was placed. Other projects Stacy is proud of in 2017 and 2018 were the moves and upgrades on the Board of Elections and Seneca Regional Planning Commission offices. She also said restructuring the Seneca County Museum and getting back to having a paid director is another positive she remembers.

Also in 2018, funding for voting new poll books and voting machines was committed by the board. Stacy and the commissioners also established a budget stabilization fund or “rainy-day” fund. She said this was a smart decision to make while things are going well economically to safeguard against possible economic downturn.

Stacy also said she worked hard to bring back an ag educator at The Ohio State University Extension office. This resulted in the hiring of Hallie Williams, who works as the agricultural and natural resources extension educator. The tailored, specialized role Williams plays is one that fits the needs of today’s residents. “We need an ag agent,” Stacy said of the process.

“Not just to have one, but we want to know what we needed in an ag agent. We set out that plan and I’m very pleased with what Hallie brings.” Williams’ position is partially paid for by Ohio State.

Looking back on her time in office, Stacy is proud of the strides made and accomplishments that occurred. “You’ve got to have good relationships to be good as a public servant,” she said. “You’ve got to understand good relationships with all facets of people … the private sector, public, internal, external, in the county and out of the county. You must be aware of what’s going on and know whether you need to leverage something to get something else you need. You don’t take unnecessary steps and you don’t spend unwisely.”

Stacy said long-term planning is paramount when doing the job. She also said it’s important to educate the public about what county government does.

Stacy said working to educate others on the role of county government was among her favorite things to do as a commissioner. Stacy’s fellow commissioners, Mike Kerschner and Shayne Thomas each thanked her for her public service and wished her the best of luck in her future endeavors.

“Commissioner Stacy has greatly contributed to Seneca County governance. She will be remembered for her pivotal contributions to the construction of the Seneca County Justice Center, for upgrades to the Board of Elections and prosecutor’s office spaces, and for the creation of the 911 fiber ring. Her leadership brought back the OSU extension agent, reorganized the museum, and regional planning. The time capsule, multiple ribbon cuttings, and many other positive events were the direct result of her organizational skills,” Thomas said. “At the commissioners’ office, we will miss her work ethic and sunny disposition. Best of luck Holly and thank you for serving your community.”

Stacy has not yet announced what her next career will be, but whatever organization she joins will be lucky to have her.