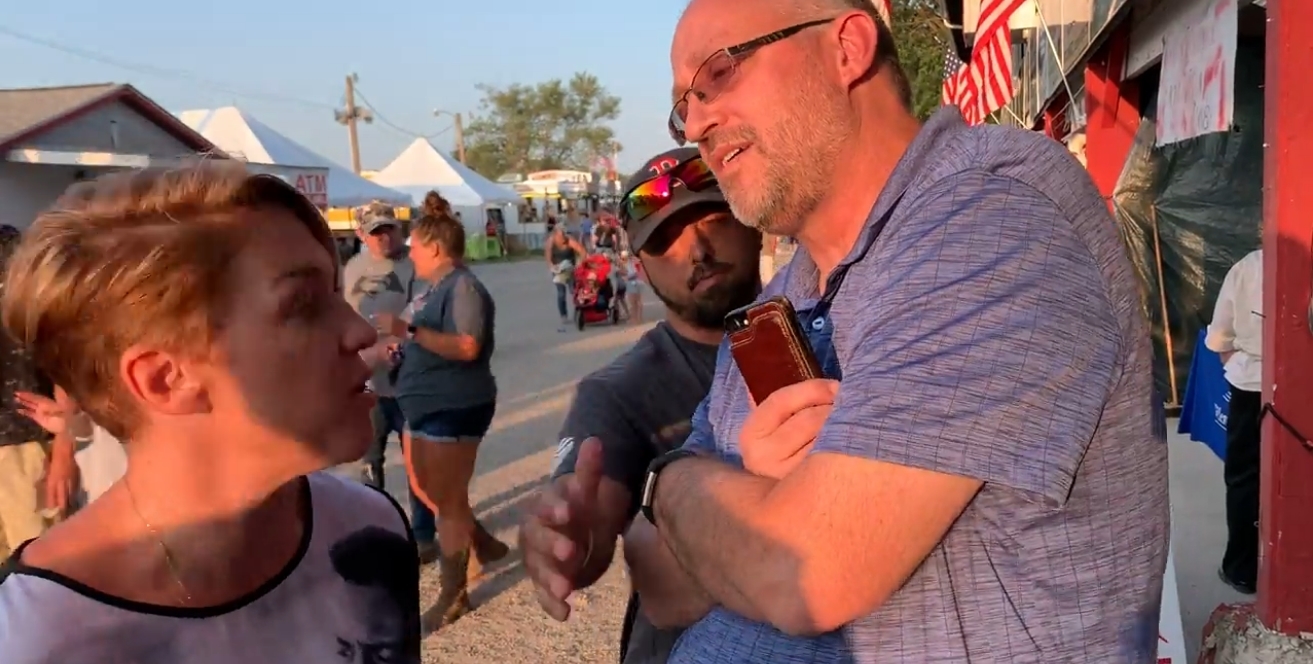 UNION COUNTY, OH (TiffinOhio.net News) — A controversial pastor from Fremont who also serves as a leader of Governor Mike DeWine’s Faith Advisory Council and as the Ohio Republican Party’s 26th District State Central Committeeman was caught on video berating a fellow Republican who is running for the 26th district seat in the Ohio Senate.

Gary Click, a pastor at the Fremont Baptist Temple in Fremont, Ohio who supports Bill Reineke’s bid for State Senate, is seen in the video berating Reineke’s conservative opponent Melissa Ackison, and at one point even getting in her face and prompting a bystander to hold him back.

Ackison, a Marysville businesswoman and conservative activist, is running for the 26th district seat in the Ohio Senate, which is being vacated by current Sen. Dave Burke (R-Marysville).

In the video, which was recorded at the Union County Fairgrounds, Click can be heard calling Ackison “trash” and saying he doesn’t believe she is a Christian.

“But you’re a pastor,” Ackison replied. “I’ve never called you a name.”

“I am very disturbed by you, as are many people,” Click said to Ackison.

After the incident, the man seen in the video holding Click back from Ackison when he gets in her face provided his thoughts on the situation.

“I swear to God Melissa, I was waiting for him to hit or push you. I can’t take watching someone do that to you,” Jordan Butler said. “This man is a pastor but he certainly doesn’t act like it. He shouldn’t be behind a pulpit and shouldn’t be in politics either,” he said of Click.

It was recently reported that Click has also been questioning Ackison’s race, of which she says she is mixed.

“This ignorant fool is leading a charge of calling me Elizabeth Warren all over social media for being proud of my family heritage and my Dad’s side of the family saying ‘She can’t be mixed race, her skin is too white. I’m not buying it’,” Ackison said in a Facebook post earlier last week.

Click made news last month when it was discovered that he has been going on a “Stop Melissa Ackison Tour” around the 26th district.

According to a source, Click has “engaged in a campaign to vilify [Ackison] by uttering false, destructive, and defamatory statements about her” in meetings and conference calls with conservative leaders, Republican Party officials, faith coalitions, and other politically-aligned groups in the 26th district.

Click, who, for a short time, supported Ackison’s campaign for U.S. Senate in 2018, appears to have “switched sides” in the 2020 Ohio Senate race. Click is now an avid supporter of Reineke’s candidacy for the 26th district seat, which represents all or part of Sandusky, Seneca, Wyandot, Crawford, Morrow, Marion, and Union counties, a district that Ackison refers to as “God’s country.”

The full, unedited version of the video, about 17 minutes in length, has been obtained and can be viewed here.