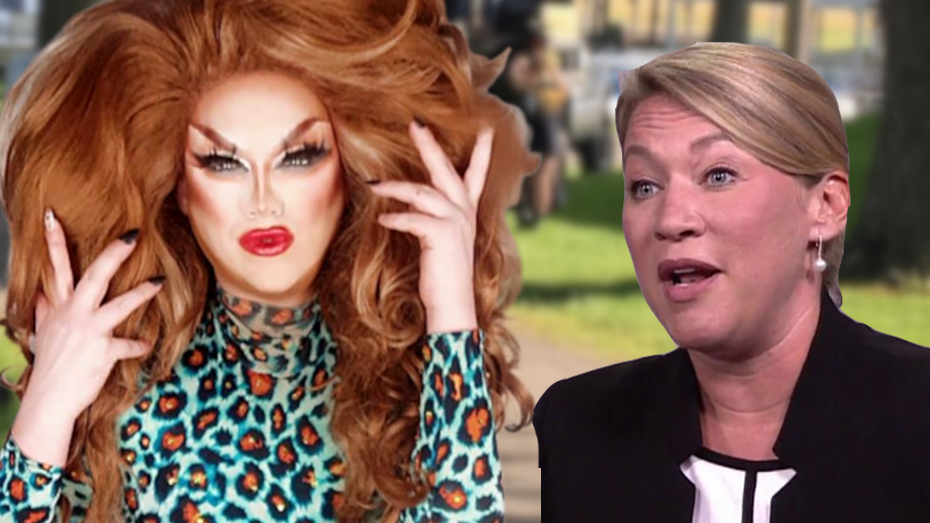 CRAWFORD COUNTY, OH (TiffinOhio.net News) — LGBT activist Kyle Gale, who appears on stage as “Selena T. West” (pictured above on left), has previously targeted women who do not approve of him teaching and reading to their children while dressed in full costume.

The details of the Facebook event state: “We are joining together to peacefully protest at the booth of Melissa Ackison located at the Crawford county fair, on July 19 4 PM to 6 PM. Melissa Ackison uses her platform to encourage hate and discrimination. She is currently running for State Senate in Ohio.”

Eleven people are currently planning to attend the protest and another 28 are “interested.” The protest follows Gale’s call for his supporters to contact children’s services and report a Christian mother who was critical of his “Drag 101” program.

Ackison expressed her opposition to that same program, which was scheduled to take place at the Delaware County Library.

The confrontation started in Ohio a little more than a month ago. Delaware and Licking County Libraries tried to use taxpayer dollars to support Pride Month activities. These activities, such as Drag Queen Story Hour, Drag 101, and a class scheduled in Licking County that included instructions on homosexual “safe” sex, are occurring around the country.

Dylan Pontiff, another man who dresses “in drag,” told his local library board in Louisiana that Drag Queen Story Hour is about the “grooming of the next generation.”

Pontiff said “grooming” simply refers to teaching children to be tolerant of those who are different.

As for Ackison, she’s not taking the threats of protest lightly. She’s already notified the local sheriff, and others.

“All of the elected officials are aware [of the planned protest], the sheriff is aware and the city prosecutor,” Ackison said. “They will be able to handle everything.”

“This should help people to see them as reasonable and tolerant,” Ackison said sarcastically of the protesters.

So far, Ackison’s only announced opponent in 2020 in the 26th District Ohio Senate race is State Rep. Bill Reineke (R-Tiffin). The Senate seat will be vacated by term-limited Sen. David Burke (R, Marysville).

The 26th Senate district includes all or part of Sandusky, Seneca, Wyandot, Crawford, Morrow, Marion, and Union counties, a district that Ms. Ackison referred to as “God’s country.”