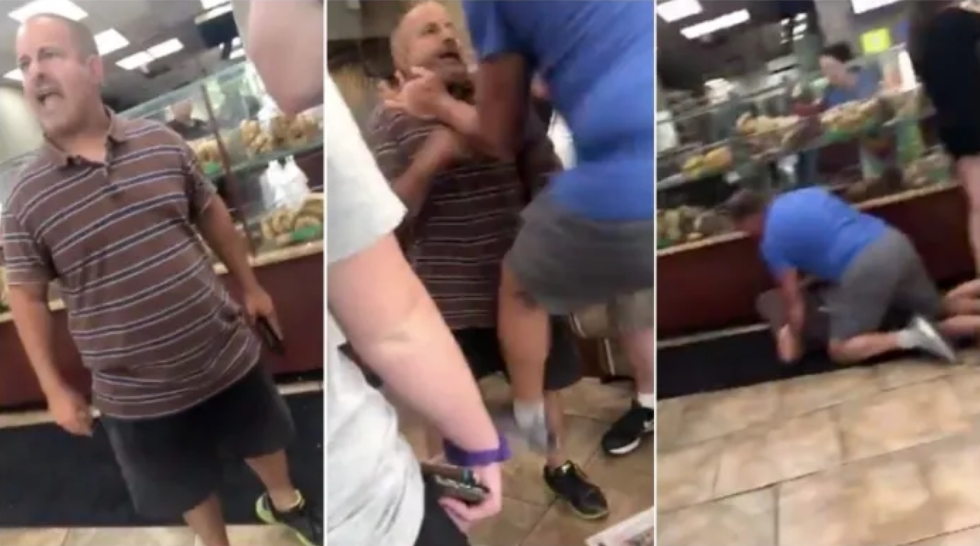 A man in a bagel shop unleashed a wild rant about women mocking his height on dating sites before he was eventually tackled, video footage of which went viral after the confrontation was posted on social media.

Twitter user Olivia Bradley posted the video of a man who seemed to be in the middle of a rant about women at the Bagel Boss located on Montauk Highway in Long Island, NY.

“Why is it OK for women to say, ‘Oh you’re 5-feet on dating sites, you should be dead.’ That’s OK?” the customer can be seen yelling in a video that had been viewed nearly 6 million times on Twitter.

In response, one of the women in the video then asked,”Who said that to you here?” to which the man replied, “Women in general have said that on dating sites!”

so in bagel boss this morning, the misogynistic douchebag seen in the video was degrading almost all of the female staff as well as other patrons. fuck this guy. pic.twitter.com/LZh1Uk4UXZ

Another male customer soon intervenes, telling the angry man to “calm down.”

The disgruntled man appears to take issue with this and screams, “You’re not God or my father or my boss.”

The two men exchange profanities before the larger man moves to pin the screaming customer to the floor.

“I just wanted bagels,” said the teen behind the camera as the two men then brawled.

If you guys wanted to know what happen next, here ya go pic.twitter.com/jOHzispksW

The bagel store employees called police to the scene to defuse the situation. Police have yet to comment on the bizarre incident.

It remains unclear if any arrests were made.

Bagel Boss owner Donald Rosner posted on Twitter: “After today’s incident everyone is ok! Use caution on dating sites and anyone who comes into our locations and mentions this video can get a FREE MINI BAGEL!!!!!!!!”