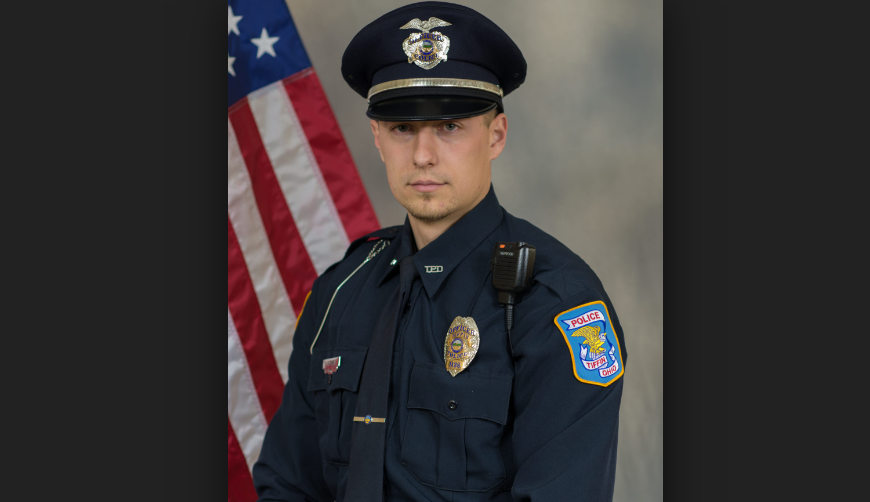 Nowak saved a woman in a house fire early Monday morning after authorities say a fire started after a woman put a cigarette into the ashtray and fell asleep while it was still smoking. The still-lit cigarette then caught onto blankets and furnishing around the woman and set them on fire, waking the woman up.

Police say a resident at 255 Wentz St. called 911 around 2 AM to report the fire. Nowak responded, and told the dispatcher that the woman “couldn’t get out” and was in a wheelchair.

Nowak ran though the burning porch and into the front door, knowing time was extremely important. He found the woman and picked her up out of her wheelchair and carried her out of the home.

Nowak was not seriously injured, but there was some siding that melted on him while he was in the burning him.

Two dogs were also recused from the burning home, by the Tiffin Fire Rescue Division.

The firemen said that the woman’s main concern was getting the dogs out of the home. One was in the living room with the woman while the other was in the basement.

Estimated damage at the property is about $45,000, according to Kevin Veletean of the Tiffin Fire Rescue Division, who called it a case of “careless smoking.”

Along with the woman who was rescued, another person lives at the home and was at work at the time of the fire. The woman was treated at the scene after inhaling the large amount of smoke, but declined to be transported to the hospital.

The residents were displaced and the American Red Cross has been contacted. The owner of the property is Delbert R. Smith Sr., according to the Seneca County Auditor’s website.

According to the fire department, smoke detectors were installed in the home but didn’t operate — possibly due to having no batteries.