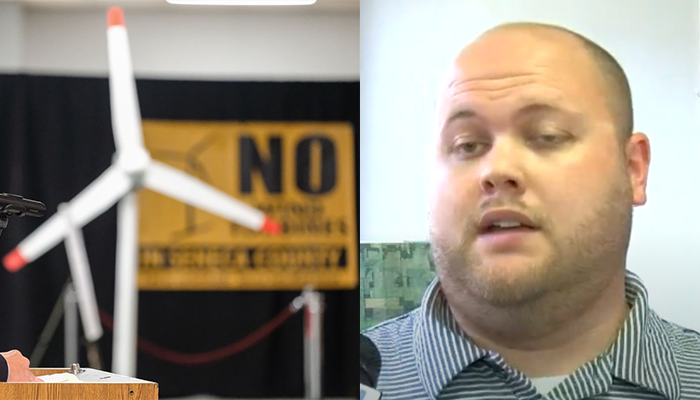 TIFFIN, OH — The controversial Seneca Anti-Wind Union this weekend launched another attack towards opponents of Ohio House Bill 6, which has been labeled by many as a “nuclear & coal industry bailout bill.”

“Any Ohio State Senator who does not vote for HB-6 is either in the tank for the wind, solar or gas industry, or does not have their thinking cap on straight,” the Anti-Wind Union posted in a social media statement on Saturday.

Changes to House Bill 6, made by the House Energy and Natural Resources Committee, include new language was added into a bill in the Ohio House of Representatives that could mean that wind farm projects throughout the state would be subject to a vote by communities impacted by the projects.

In addition, the changes would also end Ohio’s much-disputed renewable-energy and energy-efficiency mandates for utilities after this year, which cost residential electricity users an average of about $4.60 per month. Instead, residential customers statewide would pay up to $1 per month into an estimated $190 million “Ohio Clean Air Program” fund, most of which would go to help keep open the Davis-Besse and Perry nuclear plants, owned by FirstEnergy Solutions.

Matt Borges the Director of Roetzel Consulting Services and former Chairman of the Republican Party said, “The Ohio Clean Air program lowers your monthly bills, it promotes clean energy, maintains Ohio’s energy diversity, protects jobs, and protects us from harmful effects of doing nothing which would make Ohio’s air even dirtier if the state’s two nuclear power plants go off line. Ninety percent of zero emission energy that is produced in the state is produced by the two nuclear power plants and it’s in everybody’s best interest to make sure those plants don’t close. If the plants go off line peoples options will be limited and the price of other alternative forms of energy will certainly go up, what you need are options across the landscape to keep the prices down.”

“This still allows projects to move forward if a given Township votes to support the industrial wind turbine project. A majority vote of 51% of voters would be required. Otherwise, the project would NOT be able to be built in that given Township due to a lack of supporting votes. This proposed legislation answers our pleas for more local control in the siting of industrial wind turbine projects,” SAWU leader Chris Aichholz said.

The Seneca Anti-Wind Union applauded Rep. Bill Reineke’s efforts to include wording in the legislation that would allow for townships and municipalities affected by the wind farm projects to vote on the issue.

“This language establishes a local vote by effected Townships within a given industrial wind turbine project. This would happen only after the project goes through the currently in place process with the Ohio Power Siting Board (OPSB). Only if the OPSB grants a particular wind turbine project its build certificate would this proposed legislation apply. At that point a petition could be filed with the County Board of Elections that consists of 8% of the total votes cast in the previous gubernatorial election would add a referendum vote within each affected Township,” Aichholz continued.

The Seneca Anti-Wind Union’s support for a bill that is being called a “bailout for the nuclear and coal industry” shouldn’t be surprising, given the fact that SAWU has been accused of having ties to lawyers for “Big Coal” as well as “stirring angst & fear by spreading propaganda linked to the coal industry.”

Opponents of the bill, however, aren’t convinced.

If the bill passes the rate for all electricity users in Ohio would go up 50 cents a month this year, and 2.50 extra a month next year, the cost for business even more. Opponents add customers bills won’t go down and emphasized that is propaganda.

“Not only is this amendment harmful to Ohio consumers, taking away their rights to refunds, but it was also slipped in last-minute with no opportunity for a public hearing,” said Sykes. “This new bonus for First Energy is on top of the huge, unfair and unnecessary $300 million tax already proposed for all Ohioans via House Bill 6.”

“With the amount of money being spent on misleading ads meant to confuse seniors and their families and the continued lack of transparency, the Ohio Clean Air Program is looking pretty dirty.”

Based on the legislation, one company, First Energy, stands to receive the majority of the newly created $300 million Clean Air Program Fund. Ads and direct mail urging Ohioans to support the Ohio Clean Air Program for the future of their grandchildren point to “big oil” and a desire to prevent an energy monopoly as critical reasons for the new program.

“The irony of these ads is unavoidable. They are taking the stance that House Bill 6 will prevent an energy monopoly when one company is positioned to benefit the most,” said Sykes.

“Their ads have images of older consumers clearly in distress and claiming utility bills will be lowered. They’re using scare tactics claiming the future of their grandchildren and Ohio’s energy diversity depend on this bailout. The reality is that AARP is firmly opposed to this for all Ohioans, but those age 50-plus who are living on fixed incomes have the most to lose if this bill is passed as is.”

Following several days of opposing testimony from a number of individuals, consumer advocacy groups and the business community, changes were made to the original bill. However, analysis of the law indicates that rather than seeing a cost reduction in their bills, as supporters originally promised, all Ohio utility customers will still be on the hook to pay for existing energy efficiency programs and contracts with no clear end to those fees.

The substitute bill also creates a whole new set of utility bill riders and potential fees for renewable energy. It also authorizes the Public Utilities Commission of Ohio (PUCO) to create new power purchase agreements, which opens the door for unknown costs and fees to be passed on to the Ohio consumers.

“Ohioans are too smart to fall for misleading ads or scare tactics aimed at our 50+ plus population. We deserve elected officials who look out for those who voted them into office and take the time to find solutions, rather than rushing to push flawed policies through in a secretive last-minute move,” said Earl Goldhammer, a Central Ohio AARP Volunteer and past member of the AARP Executive Council.

State Representative Mike O’Brien, who is Chairman of the Energy Generation Committee, and the Energy and Natural Resources Committee which is discussing this bill presently. O’Brien said, “This is a bailout plain and simple. What has happened is that First Energy and First Energy Solutions, they’re in bankruptcy and they need a bailout. The Ohio General Assembly which is republican controlled had decided everyone who used electricity in Ohio will pay extra on their electric bill. Everyone will pay even if their electricity is not provided by nuclear power plants, everyone in Ohio will have to pay. First Energy has been bailed out before.

O’Brien continued, “Economists throughout the nation have testified in committee that we’ll be back here in the same position four or five years again to bail nuclear energy out. It’s a very expensive process. We have gas plants that are popping up all over the state, we have in excess of 2,000 years worth of natural gas because of the Marcellus and Utica shale underground. Gas plants are more efficient and a lot cheaper to operate. One plant has been completed in Lordstown and a second is under construction. Gas is the way to go for energy. It emits very, very, very small particles of carbon dioxide. The Pennsylvania legislature saw it was nothing but a bail out and they voted against that. I hope the Ohio lawmakers will see this for what it is a bailout. The people who testified from out of state in favor of the bill all had their travel expenses paid by First Energy. They are asking for hundreds of millions of dollars or 160 million for each of those plants.”

“People are going to feel the pinch. We already have had an increase in a gas tax, costs of everything keep going up, and we already have people who must decide do they pay their rent, or do they buy their prescriptions, or are they going to be able to eat tonight. People are already hurting and now to raise these rates artificially when they don’t need to be done is asking a lot of our people in Ohio. Increasing rates for businesses is also a bad idea which can cost jobs. We will fight against this. People need to contact their lawmakers and let them know they are against this bill,” State Senator Sean O’Brien added.