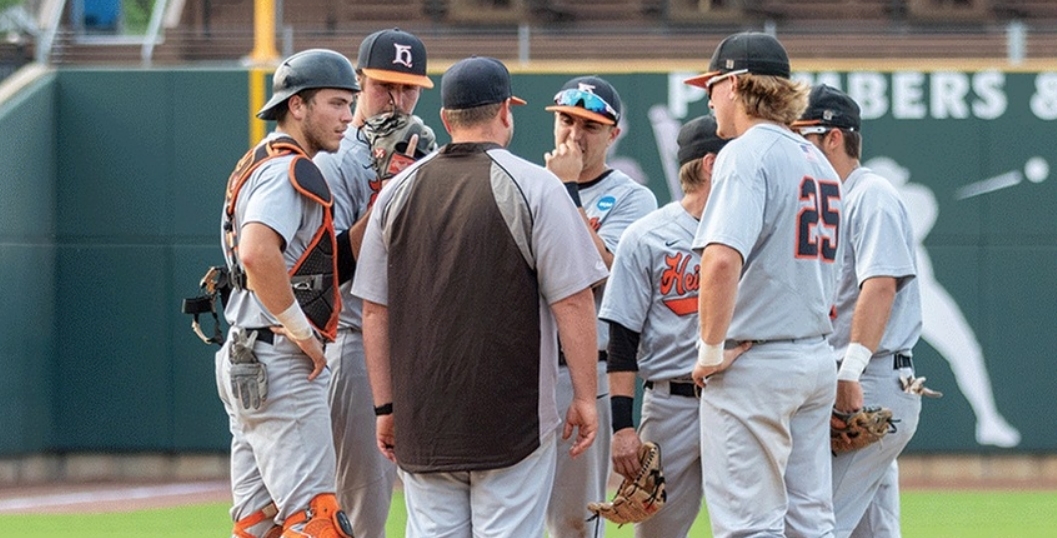 CEDAR RAPIDS, Iowa — The journey began in Fall Ball. It continued through 5 a.m. practices. They beat ranked teams. They won a share of the OAC title. They overcame the disappointment of losing the OAC Tournament by sweeping their way through regionals. They hosted super regionals and dogpiled on the mound at Peaceful Valley. Boosted by the entire campus community, they traveled to Iowa.

Heidelberg fell to Babson College, 6-5, in an elimination game in the NCAA Division III College World Series. The Beavers scored five times in the ninth inning, stunning the Student Princes and the boisterous crowd.

“Seeing the university and the community come together to support us has been great,” said Heidelberg Head Coach Chad Fitzgerald. “After the game, my message was to not let today take away from what this team has done.”

Lost in the heartbreak was an incredible catch by Robert Hunt in the fourth inning,

Heidelberg starter Trevor Adkins hadn’t allowed a hit through three innings, but ran into trouble in the fourth. After a walk and a single, Eric Jaun launched a pitch to deep center field. Hunt raced back, leapt, and snared the ball on a full extension. The catch electrified the crowd at Perfect Game Field and made waves on social media.

After Hunt’s heroics in the fourth, Heidelberg rode the momentum in the top of the fifth. Eric Devore walked and moved to second on a solid single by Hunt up the middle. Kane Bateman sent a hot shot past the second baseman into center for an RBI.

In the sixth, Heidelberg added two more. Marc Ochoa ripped a single to right and moved to second on a bunt single by Tyler Smith. Devore followed with a two-run double to the gap in left center — giving Heidelberg a 3-0 lead.

Babson finally got to Adkins in the seventh. The Beavers started the frame with back-to-back singles, just their second and third of the day. After a wild pitch, Jake Oliger scored on a sacrifice fly by Edward Lehr. With the lead trimmed to two, Adkins fanned Matthew Valente for the second out. Following a walk, Thomas Lapham sent a high chopper to Parker Fronk at first. With Adkins covering, Fronk’s flip to first was just in time to beat a diving Lapham — a call that withstood a replay challenge from Babson.

In the top of the ninth, Ochoa bopped a double to the gap in left center, scoring Kyle Jenkins from first for a critical insurance run. Fronk followed with a hard-hit ball to first that was misplayed by Valente. Ochoa was able to sprint home on the error.

Babson fought back in the ninth against all-conference closer Joey Wenning. Bateman dove for a sinking liner, but missed by inches — allowing a lead-off triple by Jaun. Lehr singled to center, plating a run. With one out and the bases full, Brian McHale lifted a sacrifice fly to center, making it 5-3. Connor Gill extended the season with a 2-2 base hit to left. No. 3 hitter Sean Harrington, down in the count 1-2, worked a full-count walk, which forced in the fourth Babson run of the game. Wenning departed, giving way to Tristan Phillips. Jake Oliger sent a 1-2 pitch into left, driving in a pair and breaking the hearts of the Tricolor.

“It was a very memorable year … Our guys have competed and battled all year long and have done everything I’ve asked of them,” said Fitzgerald. “It’s unfortunate that it ended today.”