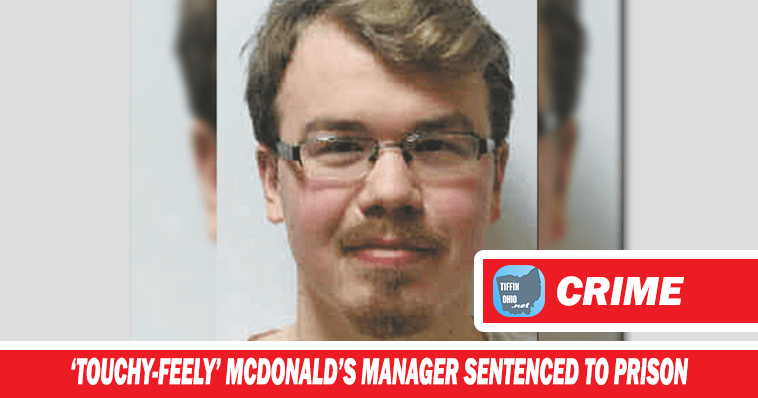 FOSTORIA, OH (TiffinOhio.net News) — A Fostoria man who pleaded guilty to sex-related crimes involving two 14-year-old female employees of the McDonald’s restaurant he managed has been sentenced to prison.

Back in May, Brandon C. Lane, 21, of Fostoria, pleaded guilty to two counts of felony unlawful sexual conduct with a minor.

Lane has also been ordered to pay restitution totaling to $180. The disgraced McDonald’s manager will also be classified as a Tier II sex offender, with in-person verification every 180 days for 25 years. He cannot establish a residence within 1,000 feet of a school or childcare center.

Authorities say Lane was a manager at the McDonald’s restaurant in Fostoria, where the two 14-year-old female victims were employed.

The Fostoria city prosecutor’s office says Lane got the two 14-year-old girls to his apartment at 816 N. Union St. in Fostoria and provided them with alcohol before the sex acts. Once the girls were intoxicated, Lane took action.

“There was a seven-year age difference,” Shuff said during the hearing.

“He was their boss, so to speak. He was their supervisor at their place of employment,” Shuff continued.

Prior to his sentencing, Lane acknowledged what he did was wrong and apologized to the victims, family, and community.

CORRECTION: A previous version of this story used the word “alleged” to describe the crimes in the case. That word has been removed as Lane has been sentenced after pleading guilty.
ShareTweet