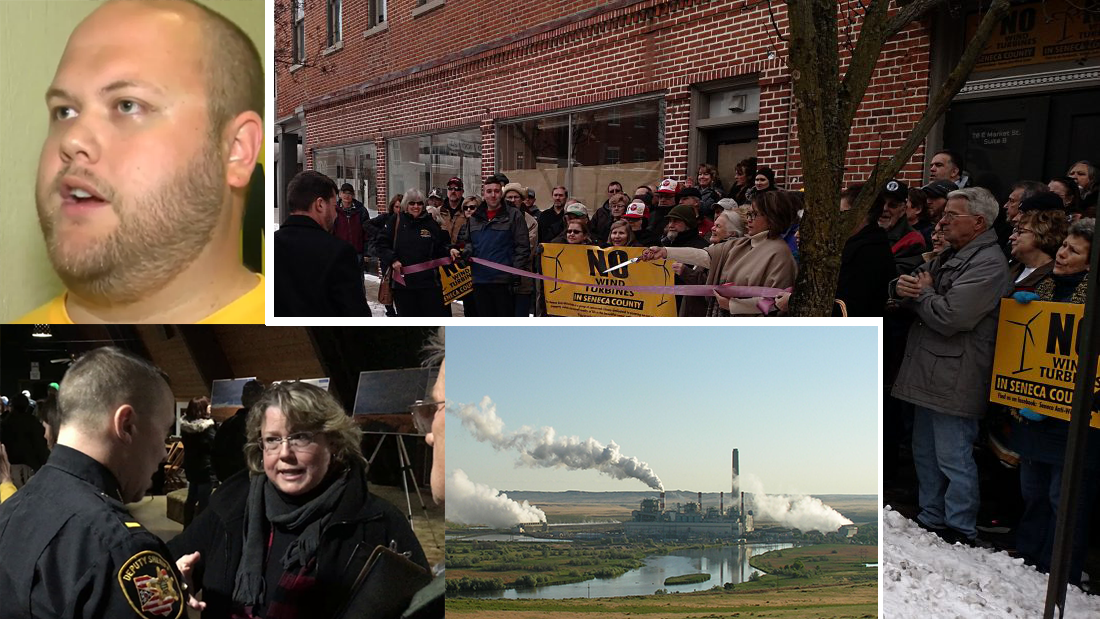 TIFFIN, OH — Talk to anyone driving into Seneca County who isn’t from the area. The first thing they’ll likely note is, “wow, you guys are really against wind turbines here!”

Why would they assume that? The Seneca Anti-Wind Union, the leading anti-renewable energy group in the area, has seen success in its efforts to frighten some residents into believing wind turbines will bring the end of the world.

Whether it be concerns about birds being killed by wind turbines, between 214,000 and 368,000  annually — a small fraction compared with the estimated 6.8 million fatalities from collisions with cell and radio towers and the 1.4 billion to 3.7 billion deaths from cats, noise pollution, or the infamous “windmill cancer” theory (which is totally false, by the way), some of the good folks in Seneca County have unfortunately bought into SAWU’s fear-mongering.

Many of these concerns bring up an entirely different question: Why is SAWU so afraid of wind energy? Perhaps they’re misinformed, perhaps they’re “afraid of change,” or the worst scenario for Seneca County residents… are they backed by special interests such as Big Coal?

Dave Anderson, an analyst for the nonpartisan Energy & Policy Institute, revealed in a December report that the Seneca Anti-Wind Union has ties to one of the leading lawyers for Big Coal.

John F. Stock, an attorney at the law firm Benesch, Friedlander, Coplan & Aronoff, is representing some top members of the anti-wind group in their fights against the Republic Wind and Seneca Wind farm projects before the Ohio Power Siting Board.

In August, The Plain Dealer revealed that coal producer Murray Energy Corp. has quietly bankrolled Stock and an expert witness as they represented two residents of Bratenahl, Ohio, who oppose the Icebreaker offshore wind power pilot project on Lake Erie in a separate OPSB case. The Bratenahl residents said they were initially unaware of Murray Energy’s role in their case.

Robert Murray, the CEO of Murray Energy, responded to the revelations with a letter to the editor doubling down on the coal company’s opposition to the Icebreaker project. The Seneca Anti-Wind Union shared a link to Murray’s letter on its Facebook page, which has just over 1,800 followers.

A few months earlier, in June, Stock filed a petition to intervene in the OPSB case for the Republic Wind Farm on behalf of the “Seneca County Residents,” a group that included top members of the Seneca Anti-Wind Union like Chris Zeman. Zeman is a locomotive engineer for Norfolk Southern, which mines and transports coal in Ohio.

“I want it to be clear that there has been zero funding provided to Seneca Anti-Wind Union from any outside big oil, big coal or dark money organizations!” Aicholz recently wrote in a letter to editor published in The Advertiser-Tribune.

Stock previously popped up in the dockets for a number of other wind farm siting cases in Ohio, representing a shadowy coal-backed group called the Campaign for American Affordable and Reliable Energy (CAARE). He appeared on behalf of CAARE in the siting case dockets for two earlier proposals by NextEra Energy and Exelon to build wind farms in Seneca County. The developers later withdrew their proposals in both those cases.

Stock has represented Murray Energy in its bid to stop a settlement plan that included an agreement by Dayton Power & Light to retire two of its coal-fired power plants. He has also represented the Murray Energy-backed Ohio Valley Jobs Alliance in its effort to block a new natural gas power plant in West Virginia, as revealed in documents published in September by ProPublica.

One of Stock’s filings on behalf of the Ohio Coal Association claimed that AEP’s renewable energy proposal is not justified because “the true costs of renewable generation such as wind and solar are much higher than other sources such as coal because renewable sources are heavily subsidized.”

The Ohio Coal Association and members like Murray Energy have backed the Trump administration’s efforts to bail out uncompetitive coal and nuclear power plants. Analysts on both sides of the debate on that issue have found the latest iteration of Trump’s bailout plan could cost consumers billions of dollars.

“Rather than helping to reduce global warming, Applicant’s wind turbine project will contribute to global warming,” Stock claimed in one filing in the Seneca Wind Farm case. Stock cited a controversial and widely misinterpreted study by two researchers at Harvard University.

“Despite what you may have read, wind farms are not causing the planet to heat up,” according to Michael Marshall, a freelance science journalist. “The current claims that they do stem from a misreading of a scientific study, which does not show anything of the kind.”

The American Wind Energy Association, Bulletin of Atomic Scientists, and Gizmodo’s Earther also flagged some flaws in the Harvard study and the resulting news coverage.

What does contribute to global warming is carbon dioxide emission from burning coal.

While Stock’s filings on behalf of anti-wind activists have overstated the impacts and ignored the benefits of wind power, his law firm has been involved in Murray Energy’s efforts to roll back protections for the climate, environment, public health, and worker safety.

Benesch, Friedlander, Coplan & Aronoff LLP was also CCed on a “Confidential Memorandum” from Robert Murray that laid out a “holistic strategy” for the Trump administration “to help to bring American Coal back from the precipice of extinction.” The memo recommended a number of actions the Trump administration could take to roll back or weaken limits on coal-related pollution and enforcement of mine safety rules.

The same meeting also featured a presentation by Samuel Randazzo, an influential anti-wind attorney and lobbyist for the Industrial Energy Users of Ohio. Back in 2011, Randazzo and Robert Murray appeared at a “Hands Off Our Energy” town hall-style meeting that was co-sponsored by the Koch-backed group Americans for Prosperity-Ohio.

Anti-wind activists, such as the Ohio-based Tom Stacy, have for years worked closely with a national network of fossil fuel funded special interest groups on efforts to roll back the Buckeye State’s renewable energy portfolio standard – a goal shared by Murray Energy.