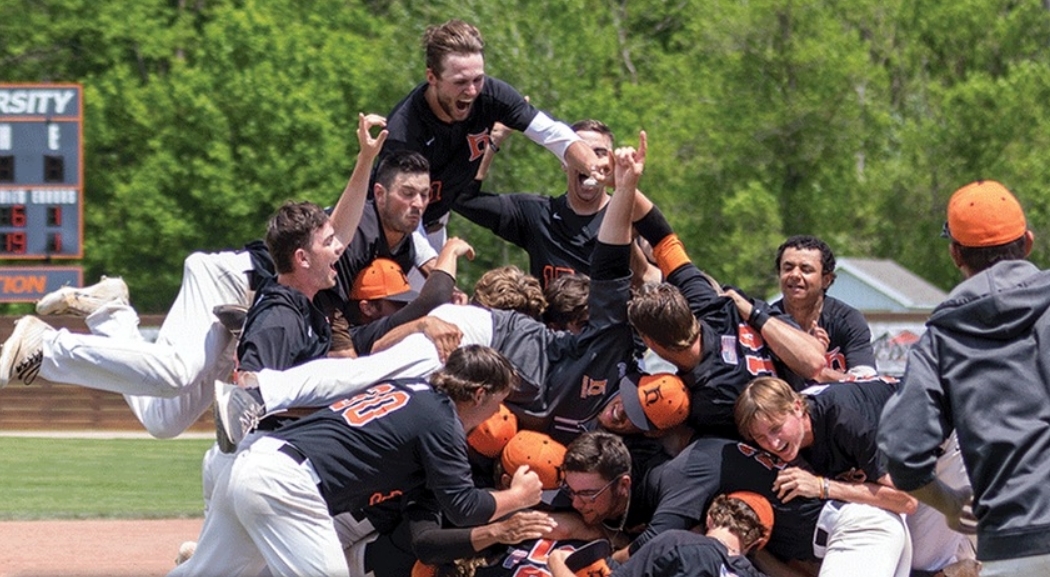 TIFFIN, OH — For the second time in program history, the Heidelberg University baseball team is headed to the NCAA Division III World Series. The Student Princes, up 4-1 through seven, used a 10-run eighth inning to cruise to a 14-1 victory over the College of Wooster.

With the win, Heidelberg emerged from the Mideast Super Regional and will head to the eight-team World Series. The event — being held in Cedar Rapids, Iowa, for the first time — will run from May 31-June 5.

“It’s a great day to be a Student Prince,” Heidelberg Head Coach Chad Fitzgerald said in his postgame press conference. “I’m just so proud of the guys and the hard work they’ve put in.”

Heidelberg (35-13) opened the scoring in the bottom of the first. Kane Bateman doubled off the wall in right then scored on a single up the middle by Kyle Jenkins.

Down 1-0, Wooster (30-15) answered in the second. Chandler Dippman was hit by a pitch and scored on a triple into the right center power alley. It was the only run allowed by Heidelberg starter Trevor Adkins and the ‘Berg staff all day.

It wasn’t long before the Student Princes were back on top. Eric Devore smashed a two-run homer to left center in the bottom of the second.

Ahead 3-1, Parker Fronk‘s clutch weekend continued with a two-out single that drove in Jenkins in the fifth.

As Adkins (8-4) and reliever Brady Knizner continued to post zeroes, Heidelberg took the 4-1 lead into the bottom of the eighth. There, they looked to add an insurance run.

And they did. In a big way.

Fronk walked, Tyler Smith singled and Devore blooped in a single to load the bases. Zach Doran singled past a drawn-in infield, scoring two. After Robert Hunt loaded the bases with a single to left, Mike Warden drove another run in with an infield single. Jenkins ripped a single to left that scored another. Matt Psychas followed, blasting a two-run double off the wall in left. Marc Ochoa drove in two more with a single to left. After Fronk singled to put runners on the corners, Smith drove in Ochoa with a single to left. Doran picked up the final RBI of the inning with a bases loaded walk. All of this came before an out had been recorded.

In total, the bottom of the eighth featured 10 runs on 10 hits.

Closer Joey Wenning got the ball in the ninth. In the non-save situation, Wenning hit a pair of batters but worked a scoreless frame. Psychas caught the final out in left field, touching off a joyous celebration at a frenzied Peaceful Valley.

“It was an awesome atmosphere down here … It’s what college baseball is all about,” said Fitzgerald.

Heidelberg has scored in the first or second inning in each of its last eight games.

In their only other trip to the Division III College World Series (2010), the Student Princes went 2-2. Fitzgerald was an assistant on that team.

The storied careers of two of the top five winningest coaches in Division III baseball came to an end at Peaceful Valley. Marietta’s Don Schaly won 1,438 games in 40 years with the Pioneers — a career that ended with a 1-0 loss to Otterbein in the 2003 OAC Tournament. Wooster’s Tim Pettorini, who announced earlier in the year that this season would be his final campaign, won 1.243 games over 38 years.

The Division III College World Series has two four-team, double-elimination brackets. The winners of each side meet for a three-game series. As information about the tournament emerge, updates will be posted to BergAthletics.com.