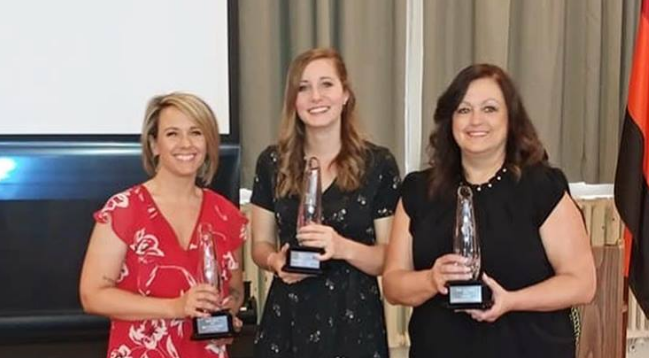 Taylor Elchert, Sasha Raitz, and Janet Molineaux were honored at Wednesday’s ceremony. This is the sixth annual ceremony to be held at Heidelberg.

Each spring, the University, through the generosity of Superior Credit Union, honors local women entrepreneurs who have excelled in four categories:

Taylor Elchert is a family photographer and specializes in maternity and newborn portraits. She has been in business for 11 years. Her work has been featured in The Huffington Post, Ever Illuminated and Lemonade & Lenses, where she also received an award.

She has been named one of the most inspiring and talented child photographers by the Child Photo Competition Team and had articles written about her in Tiffin Life magazine and Findlay Life magazine.

Taylor’s family is no stranger to entrepreneurship – her father is the owner of Fort Ball Pizza. Though they have two very different businesses, Taylor said she learned about owning a business watching how hard her dad works at it. “I am inspired by my dad,” she said.

Taylor decided while going to college that she wanted to make photography her profession. “At first I was planning on doing it on the side,” she said. “When I decided it was a full time career, I got serious about it. I needed a storefront.”

Sasha Raitz owns Meraki Salon & Barber in Tiffin. Sasha said her vision was to create a business with soul, creativity and love – a business “where you can find a piece of yourself in your work.” It’s important to her to bring sustainability to the salon and the community, she said.

Janet Molineaux is a restaurant executive who currently serves as CEO of Tiffin’s two Subway locations. A Tiffin native, Janet began working for Subway 30 years ago, working her way up to regional director, until she bought the two Subway stores. As with the other award recipients, giving back to the community is a staple of her business philosophy. “I will continue to serve the community as much as I can,” she said.