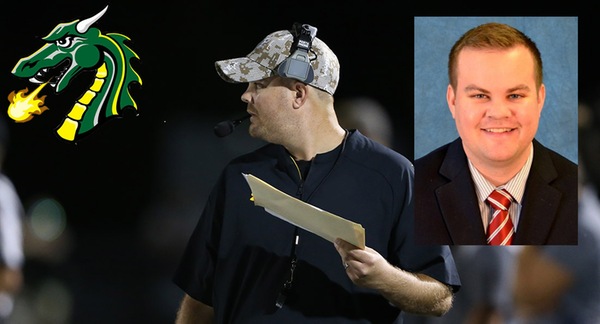 Reisert has served the past two seasons as Ohio Dominican’s offensive coordinator, helping to lead the Panthers to some of the top offensive numbers in Division II.

Last season the Panthers averaged 40.5 points per game along with 437.4 yards per game offensively. The Panthers finished 9-2 overall and tied the Dragons and Findlay for second place with a 6-2 mark.

“I’m incredibly humbled and honored to be the Head Football Coach at Tiffin University,” Reisert said. “I would like to thank Dr. Schumacher and Coach Allen for this amazing opportunity. Since I stepped foot on campus, I felt very strongly that I fit with the values and culture of the Tiffin community. Our program will be built around strong relationships, accountability and attacking success in all we do. I’m excited to work with the special group of players already assembled and look forward to continuing to build Tiffin football into one of the premier programs in the country.”

“I am extremely excited to welcome Cris Reisert to the Tiffin University Dragon family as it’s next head football coach,” said Athletic Director Lonny Allen. “We believe that Cris is the perfect guy to bring our program to an even higher level. Everywhere Cris has been he has been a winner. His passion for the student athlete experience is contagious and I believe that Cris will more than enhance that experience.”

“Cris is the right individual for the job,” said Tiffin University President Dr. Lillian Schumacher. “His energy, passion and commitment to supporting our student athletes is a perfect match for what we were looking for in our next football coach! We are thrilled to have him join our already strong athletic department knowing he will be a extremely valuable asset to the program.”

Reisert directed one of the best offenses in the nation in 2017 as ODU led the country in completion percentage, passing efficiency and fewest turnovers committed, ranked second in third down conversions, third in passing offense and fourth in total offense. The Panthers also had the 15th best scoring offense in the nation. The Panthers won the G-MAC championship following a 49-24 victory over Findlay as the Panthers averaged 45.1 points per game in G-MAC play.

Prior to that Reisert spent three seasons as the tight ends coach and recruiting coordinator at Elon University. Prior to working at Elon, Reisert spent the 2013 season as the assistant offensive line coach at Ball State University. Under his tutelage, the Cardinals had two linemen earn All-MAC honors as the team finished the regular season with a 10-2 record and earned a spot in the GoDaddy.com Bowl.

Reisert started his coaching career with Ohio Dominican in 2009, starting as the defensive graduate assistant before taking over as the quarterbacks coach in 2010. He also spent time as the recruiting coordinator, wide receivers coach and head JV coach while also assisting on special teams. Reisert was the lead recruiter for six Panthers who earned All-GLIAC honors in 2013 as ODU finished 10-1 and captured the GLIAC title, making the program’s first NCAA postseason appearance. He had receivers earn All-GLIAC honors in 2011 and 2012 and helped guide the Panthers to records of 7-4 and 8-3 in 2011 and 2012, respectively.

As a four-year starter at quarterback for Ohio Dominican, Reisert set 10 NAIA passing records and was named the 2007 NAIA Player of the Year. He was a two-year captain and two-time NAIA All-American who concluded his career with 13,388 passing yards, 120 touchdowns and 1,149 completions (67.2 completion percentage.) He threw for an average of 311.3 yards in 43 games played.

Reisert is a native of Cincinnati and attended Archbishop Moeller High School. He was inducted into Moeller’s Hall of Fame in 2012.

Reisert and his wife Emily have one son, Hawkins.