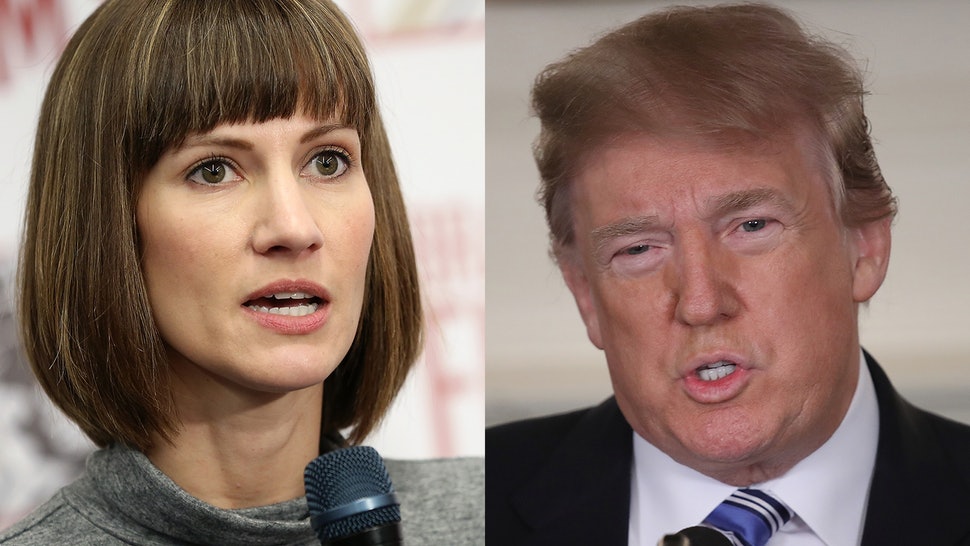 TIFFIN, OH — Ahead of the premiere of a theatrical production in New York City which will showcase the stories of women who accused now-President Donald J. Trump of sexual misconduct, one of those women, Rachel Crooks (of Tiffin), spoke out on social media regarding the play.

“In just one week, I’ll be joining fellow Truth Tellers in #NYC in a theatrical production to share our stories of sexual assault and harassment at the hands of our President. It wasn’t okay then, and isn’t okay now. We will not be silenced. #MeToo #TimesUp,” Crooks said.

Crooks, 35, has told her story numerous times about how, while working as a secretary for an investment firm in Trump Tower in 2005, she walked over to say hello to Trump at a bank of elevators, where, she says, he grabbed her and kissed her multiple times.

The production, The Pussy Grabber Plays, will debut January 14th in New York City. All proceeds raised for the play will be donated to local and national women’s rights organizations.

According to the play’s website, following the release of the infamous Access Hollywood tape in which then-presidential candidate Donald Trump bragged about women letting him “grab them by the pussy,” more than twenty brave women came forward with their own stories of Trump’s sexual misconduct, molestation and abuse.

“These women were reduced to statistics and sidelined by Trump’s election, but their voices echo now with each powerful man brought down by the #metoo movement. As theater makers and storytellers, we are committed to amplifying their voices, revealing the difficult choices they’ve made and celebrating their courage,” the play’s organizers said.

The Pussy Grabber Plays is a theatrical production comprised of a series of short plays inspired by interviews with these women, created by some of the most highly acclaimed young women writing for theater today including Anna Ziegler (Photograph 51), Halley Feiffer (I’m Gonna Pray For You So Hard), Bess Wohl (Small Mouth Sounds), Melissa Li (Interstate), Natasha Stoynoff (Captive: A Mother’s Crusade to Save Her Daughter From a Terrifying Cult, published by Simon & Schuster), Sharyn Rothstein (By The Water), Julia Brownell (NBC’s This Is Us), Patricia Ione Lloyd (Eve’s Song) and Sam Chanse (The Opportunities of Extinction).

“Telling the stories of seven women who have come forward at great personal cost, in addition to one play about all of the women who have not come forward, The Pussy Grabber Plays is a tapestry of hurt and humor, disgust and courage, honesty and anger. Each play focuses on different aspects of the women’s stories and their experiences – from telling their families what happened to them, to deciding to come forward, to their questioning and confrontation of victimhood, sexism and power.”

With an all-female creative and producing team working on a completely volunteer basis, The Pussy Grabber Plays will be produced Monday, January 14th at Joe’s Pub at The Public Theater in New York, as well as at other major theaters across the country.

“The plays will then be published online and offered royalty-free for any group that wants to perform the plays and join in our mission. It is our hope that theaters, community groups and universities around the country use this opportunity to create their own productions of the play, spreading awareness, sparking conversation, and ultimately change. All proceeds raised will be donated to local and national woman’s rights organizations,” the group said.

More information about the play can be found on their website.