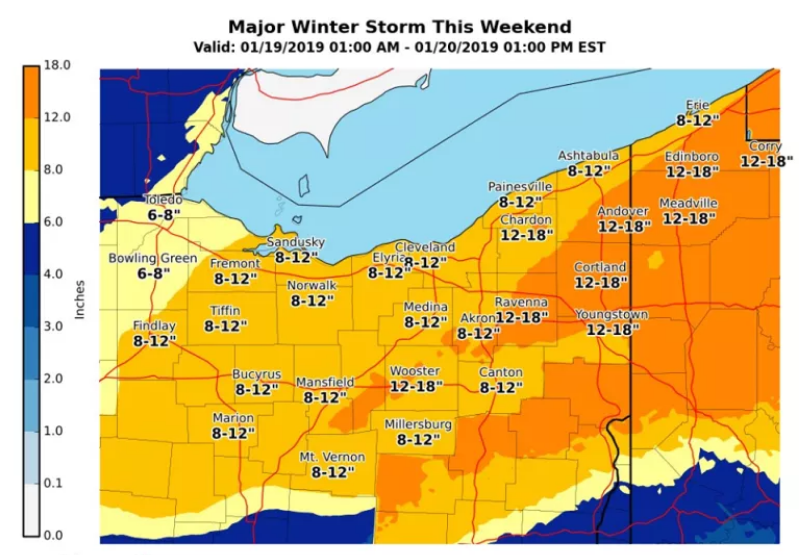 “Well folks, we are now under a Winter Storm Watch. The National Weather Service released the map below about an hour ago showing Tiffin receiving somewhere between 8″ and 12” of snow. Winds are expected to be strong as well between 20-30mph with gusts over 40mph. This may lead to significant blowing and drifting and after the storm.

Tiffin has approximately 178 lane miles of roads in the city limits, each requiring at least two passes with a plow to clear snow. We ask that residents with the ability to move vehicles off the streets to do so, as it assists our plow crews clearing the streets and parking spaces. We do understand not everyone has the ability to remove their vehicle from the road for extended periods of time and therefore only require those on designated snow emergency streets to move their vehicles.

In addition, the City and First Call for Help have coordinated with the Allen Eiry Center, located at 28 Hopewell Ave, to function as a warming center. The center will be open beginning Saturday, January 19th at 8AM though Monday, January 21st at 8AM in the event those with lack of available heating need a place to stay. There will be cots and blankets available and the center will be staffed by volunteers.

These posts are meant for information and not to scare anyone. Snow storms occur in the Winter in Ohio every year but it is our wish to avoid accidents and injuries by providing the best information we have to our residents. Stay warm and stay indoors this weekend unless you absolutely have to be out and about,” Montz said.