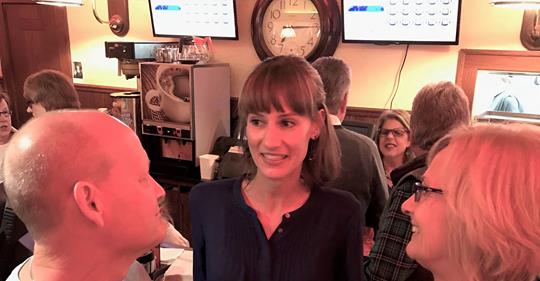 TIFFIN, OH — With just days left until the midterm election on November 6, voters all across Ohio are being bombarded with political ads from both sides of the aisle.

Locally, voters have recently reported a large number of mailers coming from Virginia attacking Democratic candidate for the Ohio House of Representatives, Rachel Crooks. The mailers are being paid for by American Jobs & Growth PAC, a super PAC out of Arlington, VA. It is unknown how much money the PAC is spending on the campaign, or where its getting its money.

Crooks is running against incumbent State Rep. Bill Reineke for the District 88 seat in the Ohio House, which includes all of Sandusky County and most of Seneca County.

There are also ads on television from the Ohio House Republican Caucus, labeling Crooks as “Radical Rachel Crooks” and stating, without any direct evidence, that Crooks is for “more abortions and weaker borders.”

Crooks released a statement Thursday in response to the attack ads.

“Who wants to have a bonfire?! More attack ads have come out against me, and these are courtesy of the Ohio Republican Party, and the dark money group, the American Jobs & Growth PAC,” Crooks stated.

“The creepy part? They photo-shopped my head onto someone else’s body! The sad part? They continue to make baseless claims.

For instance, they reference me wanting to ‘Abolish ICE’ and have ‘open borders.’ Aside from the fact that immigration and border security are matters handled by the federal government, not state, I would also add that I work daily – and have for the past several years – with ICE through my work with international students.

Through the Student & Exchange Visitor Program (SEVP), a division of ICE, I help keep record of international students here in the states and ensure they are following their visa regulations,” she continued.

“It’s too bad my opponent and his allies don’t have more to celebrate about their record, and instead resort to these tactics. Who’s ready for a positive change in government? I know I am!” Crooks said.