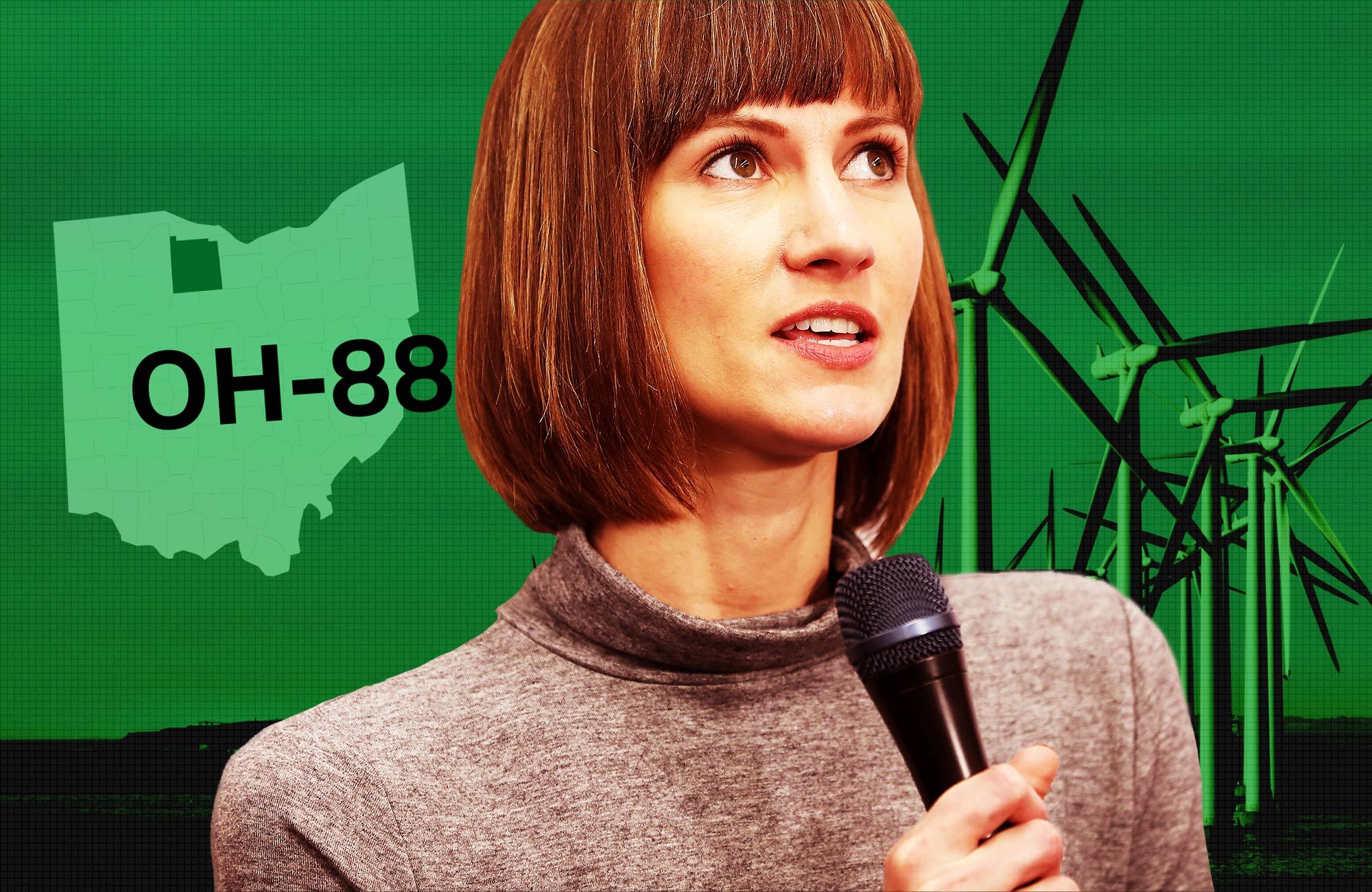 TIFFIN, OH — Following the Tuesday meeting of the Seneca Anti-Wind Union, in which multiple public officials attended, Rachel Crooks (D-Tiffin), the Democratic candidate for Ohio House in the 88th District, re-affirmed her stance on wind energy.

Crooks is running against incumbent Rep. Bill Reineke (R-Tiffin) for the District 88 seat, which includes all of Sandusky County and most of Seneca County.

“My stance, put simply, is that I am not for the wind projects as proposed. Through my research, it is clear that Ohio’s approach to energy development projects of all kinds – including wind – cater to business and corporate interests over the interests and voices of our local communities,” Crooks said in a statement on social media following the meeting.

State Rep. Bill Reineke (R-Tiffin), Crooks’ opponent, as well as Commissioners Mike Kerschner (R), Shayne Thomas (R), and Holly Stacy (R) were in attendance. Reineke and Kerschner were given opportunities to speak in front of the audience.

Commissioners Thomas and Stacy are supportive of the wind projects, with Thomas being seen by many as the most ardent supporter.

“The fact remains that there is a gap in the current processes our state uses to facilitate energy development projects such as the various wind turbine projects being proposed currently,” Crooks said. “With the state holding the authority to authorize such projects and insufficient measures to promote transparency and inclusion of local voices, it is no wonder why these projects are often met with skepticism, and they pit neighbors against one another.”

Sandusky and Seneca counties currently are being considered for various wind turbine projects by the company Apex Clean Energy and others. While some believe the wind turbines promise to be an economic opportunity, a large contingent of constituents have united to form the Anti-Wind Union group. As grassroots activists, the Anti-Wind Union has been sharing their concerns regarding property rights issues, as well as the general health, safety, and welfare of individuals and wildlife. Over 500 people were in attendance at a recent group meeting in Attica, and they have called on commissioners in Seneca County to rescind the Alternative Energy Zone.

Crooks considers herself an environmentalist who believes in climate change and the need to invest in renewable energy sources. Indeed, Crooks says she thinks turbines look beautiful on the landscape; however, she believes that energy development projects, especially those involving something as physically large – some proposed at approximately 600 feet – and numerous as the turbines being considered, warrant a more collaborative approach between industry, state regulators, local governments, and ultimately the citizens who will be living near the energy sources.

Various bills are under consideration currently in the Ohio House and Senate that would reduce the setback restrictions for wind turbine projects. The current setbacks were put in place in 2014 and essentially halted any wind production in the state. Crooks believes such setback restrictions are only one part of a greater issue regarding wind turbine and other energy development projects, and therefore, she would not endorse the bills being debated at present.

“You should also know that I have signed the American Promise 28th Amendment Pledge which calls for a government free from the undue influence of money in politics. As such, I refuse to accept money from corporate PACs, which is in stark contrast to my opponent, Mr. Reineke. My average campaign contribution is just $39, and the donations come from ordinary citizens because they are who I want to held accountable to,” Crooks said.

According to Crooks, too much authority has been given to the Ohio Power Siting Board in this process. “Concentrating authority in this way can lead to susceptibility to corporate influence,” Crooks says, and if elected in November, she would welcome the opportunity to include all relevant stakeholders in creating new policies that encourage a collaborative approach to energy development.