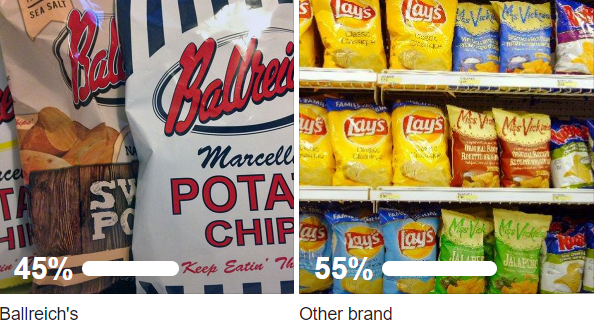 TIFFIN, OH — For the first time ever since public polling has been conducted to see what brand of potato chips Tiffin locals prefer, the locals have decided that in the latest June 2018 poll, they prefer other brands over Ballreich’s, 55% to 45%.

The poll was conducted by Tiffin Publishing Company via Facebook and surveyed 1,682 individuals, with a margin of error of plus/minus 2%.

Facebook comments revealed locals are starting to prefer other brands such as Utz (which has a “wavy” variety similar to the OLD Ballreich’s, we’re told), Lay’s, Ruffles, Conn’s, etc.

Previous polling had pointed to Ballreich’s remaining a local favorite, but a change in the company’s oil used to produce the potato chips has resulted in a drop in popularity among locals — and consumers everywhere.

Facebook complaints revealed widespread dissatisfaction with Ballreich’s products. A source close to Ballreich’s executives revealed to TiffinOhio.net that the findings “worried them.”

What should Ballreich’s do to improve their chips now that widespread dissatisfaction has been revealed? Let us know in the comments.