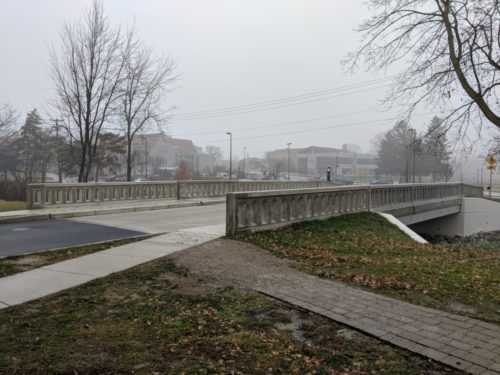 TIFFIN, OH — In recognition of his 43 years of service to the City of Tiffin, the Rebecca St. bridge shall be named The Bernard J. Hohman Bridge, in honor of the former mayor, in a dedication ceremony Dec. 28 at 4 p.m. to be held the atrium of the Gillmor Science Hall on Heidelberg’s campus. This information comes from a press release from the City of Tiffin.

Current Tiffin Mayor Aaron Montz invites the community to join him in recognizing former mayor Hohman and his accomplishments. “We would like to thank Bernie for his many, many years of dedication to the city. Much of our success today can be credited to the groundwork laid during his tenure,” he said.

Tiffin City Council passed an ordinance Nov. 29 to rename the recently rebuilt bridge, reading, “the Mayor’s contribution of his intelligence, work ethic and leadership skills to the City of Tiffin has made the City that he loves a better place to work, live and play.”

Bernard Hohman, a Democrat, served as the mayor of Tiffin from Jan. 1, 1996 through Dec. 31, 2007 after previously serving as Fourth Ward councilman for more than 11 years and president of city council for more than 10 years.

Hohman led the city in many growth projects. He was instrumental in negotiating cooperative development agreements with Seneca County, Clinton Township and Hopewell Township that resulted in the annexation of many areas for residential, commercial and industrial development.

He initiated the multi-phased sanitary sewer project which will benefit the environmental health of the city. He also oversaw the acquisition and development of the Eagle Rock Business Park that has attracted several new employers to the city. The positive impact of his service on the city will be felt for decades.