COLUMBUS, OH – Ohio Governor John Kasich released his annual resolution for the Ohio State-Michigan game from his office on Friday, reading in part:

“WHEREAS, players from that team up north have recently discovered facts, just like first downs, are difficult, including the fact that last year the Buckeyes most assuredly scored more points than their rival, and will do so again, and again, and again. …”

The governor wanted to clear up last year’s OSU-Michigan game, where Ohio State prevailed 30-27 in double overtime, following a controversial spot that still hurts to watch from some Michigan fans. 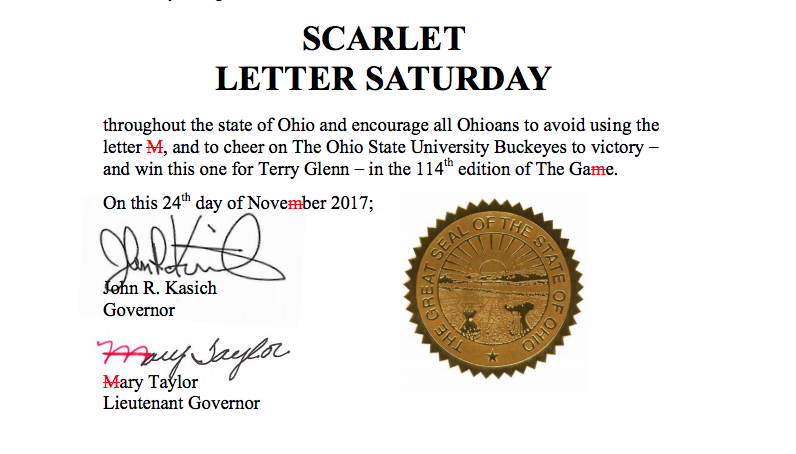 The governor also wanted to ensure Ohio residents are refraining from using the letter M on Saturday, when Ohio State faces Michigan in the Michigan Stadium in the 114th edition of the rivalry game.

The game starts at noon on Saturday. Anyone with a DirecTV subscription will need to find another place to watch the game, as DirecTV and FOX and currently in a dispute that doesn’t allow FOX networks to air on DirecTV.

Along with many other local venues, Buffalo Wild Wings – Tiffin will be opening at 10 AM to host the game. Although they usually have DirecTV, they also have a backup cable receiver for events like this, sources tell us.