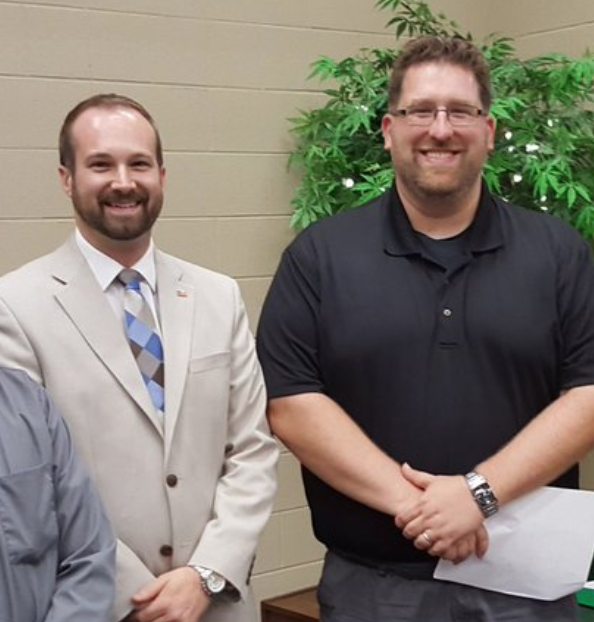 Tiffin City Council has a new member after the Seneca County Democratic Party‘s Central Committee made an appointment to a vacant seat Thursday night.

Tiffin Middle School seventh- and eighth-grade history teacher Ben Gillig will fill the seat of Mark Hayes, who moved from an at-large council position to council president after the resignation of former Council President Rich Cline Sept. 30. Hayes had been president pro tem.

Tiffin Law Director Brent Howard said because Hayes’ seat was vacant and because he ran as a Democrat in 2013, the county Democrats were given the right to appoint a replacement. Howard said in September that Gillig was a “logical choice” since he is running as a write-in candidate for an at-large position in the Nov. 7 election. If Gillig and council members Tyler Shuff and Steve Lepard each get one vote, all three will be elected because they are the only certified candidates on the ballot.

Seneca County Democratic Central Committee Chair Jim Fruth said Gillig could not attend the meeting Thursday because he was coaching at a Tiffin Middle School football game, but Fruth sent a message from Gillig: He wanted the seat.

“It’s the common sense thing to put him in place and let him get to work,” he said.

The three members of the central committee who were at the meeting and represent Tiffin precincts unanimously voted to appoint Gillig. Seneca County Board of Elections Deputy Director Lori Ritzler was one of the three.

She said she didn’t know Gillig personally, but she was comfortable voting for him because of support council and the city administration have given him.

Hayes, who was at the meeting, said the plan is for Gillig to be sworn in before Monday’s council meeting. Gillig is to finish the year as an appointee before starting a four-year term Jan. 1.

Gillig said he is honored and excited about the opportunity.
“I’m thrilled and honored by their faith in me,” he said he said by phone after the meeting. “It’s a dream come true.”
Gillig said he’s looking forward to representing the Democratic Party and continuing to better the city.

“Honestly, my first goal is just to jump in with both feet and kind of learn from the good people already on council,” he said.

He graduated from Columbian High School in 2000, before attending the College of Wooster. He said he has been teaching for 13 years and has been coaching football for eight.

Gillig is the head football coach for Tiffin Middle School’s eighth-grade team, a member of the executive council for the teacher’s union and serves as president of the Seneca County Museum Advisory Board. He also hosts Downtown Trivia Night.

He said he always wanted to run for office, but didn’t think it would happen this soon.

Gillig’s father, Fred Gillig, ran for Tiffin City Council in the 1980s and lost by 12 votes.

“My dad was big on service to the city. He spent years on the Zoning Board of Appeals and on the city planning commission,” he said. “This is for you, Dad.”
In other news, Fruth said early voting is under way at the board of elections.

She also said poll workers who are Democrats still are needed for Election Day. Those interested can contact the elections office at (419) 447-4424.

In other business, the county Democratic Party endorsed:

• A 0.7-mill, 10-year levy for the Mental Health and Recovery Services Board of Seneca, Sandusky and Wyandot Counties. The levy is to provide services in Seneca County, according to Mircea Handru, executive director.

• A 0.25-percent income tax increase in Tiffin to pay for road and bridge maintenance, improvement and repairs. If approved, the tax would cost 25 cents for every $100 earned.